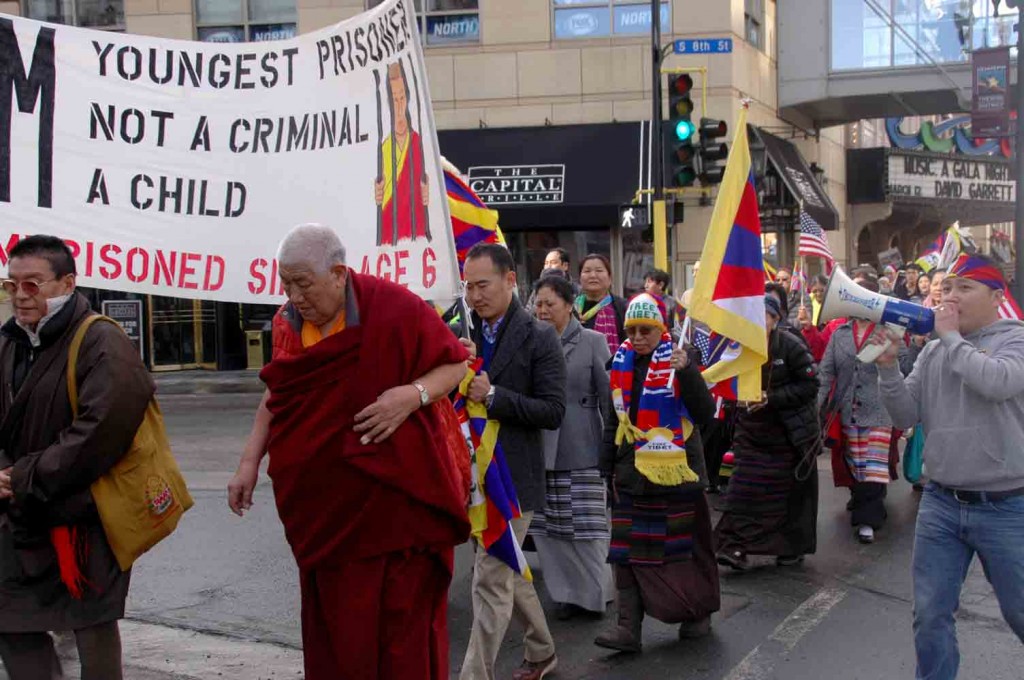 CHICAGO (March 11, 2014) — Several hundred Tibetans from Minnesota traveled to Chicago on Tuesday to mark the 55th Tibetan National Uprising anniversary with a protest in front of the Chinese Consulate.

“Tibet belongs to Tibetans, China out of Tibet,” shouted the group. 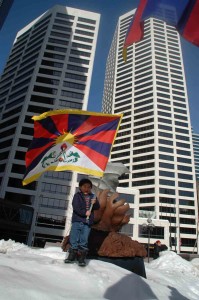 A Tibetan child waves the Tibetan national flag in front in Minneapolis on Tuesday.

The group of Tibetans from Minnesota were joined by other Tibetans residing in and around Chicago. At the same time, a group of around 300 Minnesota Tibetans who couldn’t make the trip, instead marched across Downtown Minneapolis to call for international intervention to end the human rights crisis in Tibet.

“Today is a historical day for Tibetans whole over the world as on this same day in 1959, thousands of Tibetans in Tibet rose up and revolted against the Chinese government in order to protect their leader (the Dalai Lama) and the Tibetan nation from the Chinese invation,” said Tsewang Rigzin, former head of the largest non-governmental Tibetan organisation, Tibetan Youth Congress.

“Until and unless, we success to protect our leader and our nation, it is the responsibility of all Tibetans to take part in the movement,” said the former head of Tibetan Youth Congress.

Sonam Tsering, a Tibetan immigrant in the United States who calls “Minnesota as his second homeland” expressed his solidarity with the plight of Tibetans inside Tibet.

“We Tibetans are always peaceful. Tibetans in Tibet never resort to any kind of violence when ever they protest against the Chinese government,” said Sonam Tsering.

“But what the Chinese government do is put more security personels and more force leading to more arrest and more torture,” said Sonam.

On several occasions in the United States and in India in recent months, Tibetan Spiritual Leader the Dalai Lama has urged its people to be “careful” before holding any protest against the Chinese government.

The Dalai Lama told the Tibetans to think “twice” before holding any anti-China protest citing the consequences which he said would face by the Tibetans inside Tibet.

“We can shout in exile, but Tibetans inside Tibet are under China,” said the Dalai Lama last weekend during a meeting with Chinese and Tibetan students in the Minneapolis.

Under the patron of Tibetan spiritual leader, Tibetan Government in Exile had publically declared that Tibetans are willing to stay under the Chinese government if a “genuine autonomy” is given to the Tibetans.

Tendar Tsering is a Tibetan freelance journalist based in Minnesota.