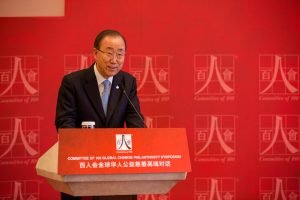 United Nations Secretary-General Ban Ki-moon speaking at a Committee of 100 symposium at the Diaoyutai State Guesthouse in Beijing on July 8, 2016. (Committee of 100 photo)

This first-of-its-kind event at Diaoyutai State Guesthouse was held in honor of His Excellency United Nations Secretary-General Ban Ki-moon, and featured top U.N. officials and other dignitaries including the Right Honourable Gordon Brown, former U.K. Prime Minister and U.N. Special Envoy for Global Education; Minister Qiu Yuanping, Director of the Overseas Chinese Affairs Office of the State Council of P.R. China, Ambassador Liu Jieyi, Permanent Mission of P.R. China to the United Nations, a distinguished delegation of twenty Committee of 100 members, and many other luminaries.

Setting aside time from his packed visit with Chinese leaders last week, U.N. Secretary-General Ban Ki-moon delivered an inspiring keynote speech during lunch, commending Committee of 100 members and other leading philanthropists in the room for their long history of contributions to social progress. He also called on attendees to be part of a “serious 15-year partnership” to help achieve the U.N.’s global goals. (Click here to read the full transcript of Ban Ki-moon’s speech)

At the end of lunch, Committee of 100 presented Secretary-General Ban Ki-moon with the C-100 “Global Leadership Award” recognizing his spearheading efforts to promote global philanthropy as part of the U.N.’s Sustainable Development Goals, and in particular, for championing partnerships with Asian philanthropists in the post-2015 global development agenda.

This event is the first in a series of Committee of 100 high-level convenings of Chinese philanthropists from the United States, Greater China and around the world. Through these efforts, C-100 aims to elevate the profile of Chinese philanthropy as a collective force for good and strengthen strategic alignment of individual action towards a shared vision of global prosperity.