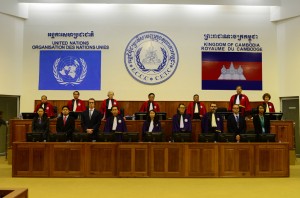 Inside the Extraordinary Chambers in the Courts of Cambodia (ECCC) as guilty verdicts are handed down in the trial of Nuon Chea and Khieu Samphan. (ECCC photo)

PHNOM PENH (Aug. 7, 2014) — A United Nations-backed court has found the two most senior surviving leaders of Cambodia’s brutal Khmer Rouge regime guilty of crimes against humanity and sentenced them to life in prison.

The Extraordinary Chambers in the Courts of Cambodia (ECCC), a hybrid war crimes tribunal established in 2006, convicted Nuon Chea, 88, and Khieu Samphan, 83, of murder, extermination and other charges of crimes against humanity for their roles in the Pol Pot regime which ruled from 1975-1979.

Nearly 2 million people are thought to have died during that period of forced labour, starvation, torture and execution.

The verdict was heralded by both Cambodia’s Government and the UN as a “historic moment in international criminal justice.”

“It is also a momentous day for the people of Cambodia. Since the Khmer Rouge regime was overthrown on 7 January 1979, just over 35 years ago, the Cambodian people have struggled to rebuild their society,” said Sok An, Cambodia’s Deputy Prime Minister and Stephen Mathias, the UN Assistant Secretary-General for Legal Affairs in a joint statement released today. 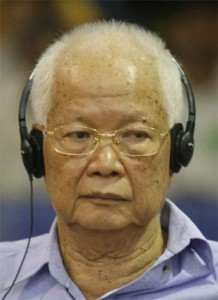 The Trial Chamber found that, together with other Khmer Rouge leaders, both Nuon Chea and Khieu Samphan participated in a criminal enterprise to achieve a rapid socialist revolution through a “great leap forward” by whatever means necessary including through the mass evacuation of urban centres to establish an agrarian utopia. According to the court, both had implemented policies that forcibly displaced people.

In April 1975, during the first phase of the movement of the population at least two million people were forcibly transferred from Phnom Penh by Khmer Rouge soldiers often at gunpoint, and in terrifying and violent circumstances. The population was forced to march to rural areas during the hottest time of the year and without adequate food, water or medical care.

According to the Tribunal, there were numerous instances of Khmer Rouge soldiers shooting and killing civilians during the course of the evacuation, while many others died of exhaustion, malnutrition or disease. There was another phase of the movement of the population between September 1975 and December 1977, where scores more were displaced.

Over the trial period, the UN deployed international judges, prosecutors and staff to the ECCC through the UN Assistance to the Khmer Rouge Trials. The substantive hearings began in 2011 and concluded with closing statements on 31 October 2013. During the 222 days of trial, the Chamber heard testimonies from 92 individuals. An unprecedented 100,000 people visited the court to see the trial, while millions more followed it through live television, radio broadcasts and the internet. 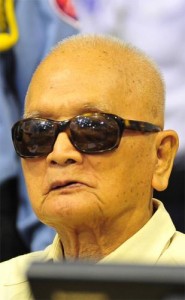 While the war crimes tribunal found only Nuon Chea to be responsible as a superior for all crimes committed, both Nuon Chea and Khieu Samphan have the right to appeal their convictions and sentence imposed.

Later in the day, United Nations Secretary-General Ban Ki-moon took note of the ECCC decision calling it a “momentous day for the people of Cambodia and for international criminal justice.”

Meanwhile, he also welcomed the National Assembly of Cambodia’s holding sessions from 8 August with all members, including opposition parliamentarians. Welcoming the reopening of Freedom Park in Phnom Penh, he encouraged the two main parties in Cambodia to continue their efforts toward reform and strengthening of democratic institutions “in a spirit of cooperation for the benefit of all Cambodians.”