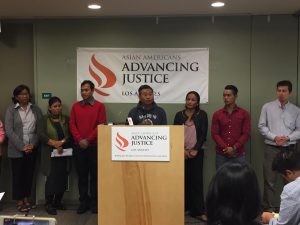 In the U.S., Cambodian refugee families struggled with trauma and poverty in violence-ridden neighborhoods. Some refugees made mistakes in their youth, which led to criminal convictions and ultimately deportation orders. But because Cambodia has refused to accept them for deportation, ICE had to release Cambodian detainees instead of keeping them indefinitely and unconstitutionally detained. But ICE was forced to release them because Cambodia refused to accept them for deportation. Since their release, in some cases decades ago, these refugees have returned to their communities and rebuilt their lives. Many have U.S. citizen spouses, children, siblings, and relatives who rely on them for support. For decades, they have cared for their families and led peaceful and productive lives in their communities. The recent raids appear to be a tactic by ICE to coerce Cambodia into cooperating with a U.S. deportation policy that breaks families apart.

“In the 22 years since my conviction, I have worked hard to support my family and give back to the community,“ said Mony Neth of Modesto, Calif., one of the plaintiffs in the lawsuit. “To be suddenly torn away from my wife, daughter, and elderly parents is devastating to all of us.”

“ICE has traumatized entire communities by re-detaining people with no warning and for no legitimate reason,” said Jenny Zhao, immigrant rights staff attorney at Advancing Justice – ALC. “We demand that ICE release these Cambodian refugees and stop violating the law.”

“A bedrock principle in our Constitution and laws is that the government may not detain individuals whenever it pleases,” said Christopher Lapinig, Skadden Fellow at Advancing Justice – Los Angeles. “With these actions targeting the Cambodian American community, the administration is yet again running roughshod over the Constitution and will do anything, with utter disregard for the rule of law, to advance its xenophobic, anti-immigrant agenda.”

“I came to the United States when I was six years old as a refugee from the war. This is the only place I’ve ever known as home,” said Nak Kim “Rickie” Chhoeun, a plaintiff in the lawsuit. “When I was detained two weeks ago, I felt betrayed and confused. My family and entire livelihood was taken from me without any reason or explanation.” As requested by ICE, Chhoeun reported to the immigration office on October 20, 2017. He was unexpectedly arrested by ICE officers and transported to the Theo Lacy detention facility in Orange. Chhoeun lives in Long Beach, California where he has worked as a satellite technician for AT&T for the past fifteen years.