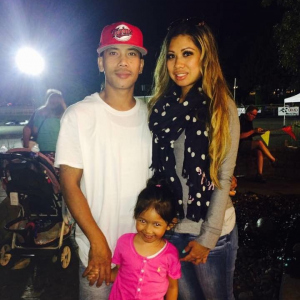 Maplewood, Minn. (March 21, 2017) — Another family of the #ReleaseMN8 campaign has secured a temporary reprieve from deportation for their loved one.

Last Friday, Chamroeun Phan was issued an emergency stay of removal by an immigration judge to allow time for the court to review a motion to reopen his immigration case. If approved, Phan would have the opportunity to seek deportation relief through a 212(h) waiver by demonstrating that his family would suffer extreme financial and emotional hardship if he is deported. The stay of removal for Phan comes weeks after a judge approved a 212(h) waiver for Ched Nin, another of the #ReleaseMN8 detainees.
Like many other Cambodian refugees facing deportation, Chamroeun Phan was born in a Thai refugee camp and never set foot in Cambodia. He came to the U.S. at the age of one and is the youngest out of seven siblings. Phan supports his wife, their five-year-old daughter, and his elderly parents, all of whom are U.S. citizens.  Since he was detained by Immigration and Customs Enforcement (ICE) last summer, Phan’s wife has strained to keep up with mortgage payments on their home by working double shifts. Her frequent absence along with her husband’s detention has caused their five-year-old daughter to struggle emotionally, which has impacted her performance in school.
Both of Phan’s parents suffer from post-traumatic stress disorder (PTSD) from the genocide they witnessed in Cambodia. His mother, who suffers from type 2 diabetes, and father, a Cambodian Freedom Fighter for the U.S. during the Vietnam War, have both suffered from depression since Phan was detained.
Phan was detained in August by ICE during a routine check-in for an old conviction for which he had already served his sentence. In 2009, he was charged with property damage when he broke windows at a restaurant he visited often with family and friends. The owner never filed charges and recently expressed support for the cancellation of his deportation. Phan was sentenced to 365 days but only had to serve 40 days with probation. He has not reoffended since then. Until his detention, he worked as an electronics repair technician. His employer wants to hire him on again if he is released, citing his exceptional integrity and work ethic.
Quyen Dinh, executive director of the Southeast Asia Resource Action Center (SEARAC), said she applaud the judge for allowing Chamroeun’s family to exercise their due process rights to pursue deportation relief.
“Many other community members in the past have been deported before they were able to fight back through legal channels.” Dinh said. “These legal battles are important, but they are only a last resort as long as Congress continues to mandate double punishment and automatic deportation for refugees and lawful permanent residents. Our hearts and prayers are with the 34 families awaiting imminent deportation of their loved ones.”
Phan’s sister, Montha Chum said the family is incredibly happy that Chamroeun was issued an emergency stay of removal, but that there is still have so much work to do to prepare for a court hearing if their motion to reopen is granted.
“We hope that ICE releases him from detention soon to reunite with our family,” she said. “At the same time, our hearts go out to the other families who won’t have the opportunity to fight their case in front of a judge.”
Though Phan has been issued the emergency stay of removal, ICE has yet to release him from detention. The ReleaseMN8 campaign issued an action alert to mobilize congressional leaders to support the release of all of the MN8 detainees and ensure access to due process for those seeking legal avenues for relief. Click here to see how you can support Chamrouen Phan and the rest of the MN8.
Share