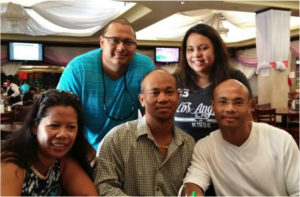 Touch Hak, far right, with brother Puthy, center, and other members of their family.

Last year, Touch was granted a one-year temporary reprieve from deportation in order to donate a kidney to his older brother, Puthy Hak, who is suffering from end-stage renal failure and undergoing kidney dialysis. After preliminary testing concluded, the brothers were devastated to learn they were not an exact match. Upon hearing this news, they turned to the Organ Procurement and Transplantation Network Paired Donation Pilot Program at the University of California-San Diego (UCSD). The program would match the brothers with another donor-recipient pair, enabling Puthy to receive a kidney. However, the procedure required Touch to remain in the country for at least three years, well beyond the one-year relief initially granted by ICE.
“I struggled a lot growing up in a refugee camp and then the projects, when my family came to California,” said Touch Hak. “I survived a shooting at my elementary school and fell into drug addiction.  I lost everything when I went to prison, but my brother was always there for me and helped me turn my life around.  I owe so much to him. Now it’s my turn to be there for him.”
In July, Asian Americans Advancing Justice – Orange County (Advancing Justice-OC) filed an application with ICE to stay Touch’s removal for a three-year period to allow him and his brother to qualify for UCSD’s paired donation program. The Southeast Asia Resource Action Center (SEARAC) together with almost 40 national and local organizations, also sent a letter to ICE requesting that they exercise prosecutorial discretion in granting the stay of removal on humanitarian grounds.
In September, Touch was granted another one-year stay–not nearly enough time to undergo the lengthy testing and post-operative period required for the paired donation program. SEARAC and Advancing Justice-OC continued to advocate on Touch’s behalf.
“ICE told us that their internal policy was to only grant a one-year stay of removal,” said Jacqueline Dan, Touch’s lawyer and staff attorney at Advancing Justice – OC. “We had to point out that their own regulations fully allow them to grant any amount of time that they deem appropriate under the circumstances.”
Touch flew to Washington, D.C., to join SEARAC in meeting with senior ICE officials, as well as California lawmakers Reps. Loretta Sanchez (CA-46), Zoe Lofgren (CA-19), and Jerry McNerney (CA-19), who had followed up with ICE in support of his case. In October, SEARAC, together with local advocates from its Leadership, Empowerment, and Advocacy Fellowship (LEAF), once again met with ICE officials regarding the case.  Senior ICE officials then began working with Advancing Justice-OC and SEARAC to draft a stay of removal that would allow the brothers to be enrolled in the paired donation program.  At the end of the month, Touch received a letter from his local ICE field office informing him that he would conditionally be granted a three-year stay of removal upon UCSD enrolling him into the paired donation program. On Nov. 6, the brothers were informed that UCSD would move forward with the enrollment process.
“This is a huge win for the refugee and immigrant community that will set the precedence for other families needing prolonged protection from deportation,” said Quyen Dinh, executive director of SEARAC. “But we must not stop here. Touch Hak was welcomed into this country as a refugee and raised as an American. He has taken full responsibility for his past crime, served his time, and has undergone a powerful journey of transformation and racial healing that should not end in deportation. Even beyond his transplant operation, we will continue to fight for Touch to stay in the only country he knows as home.”
Share