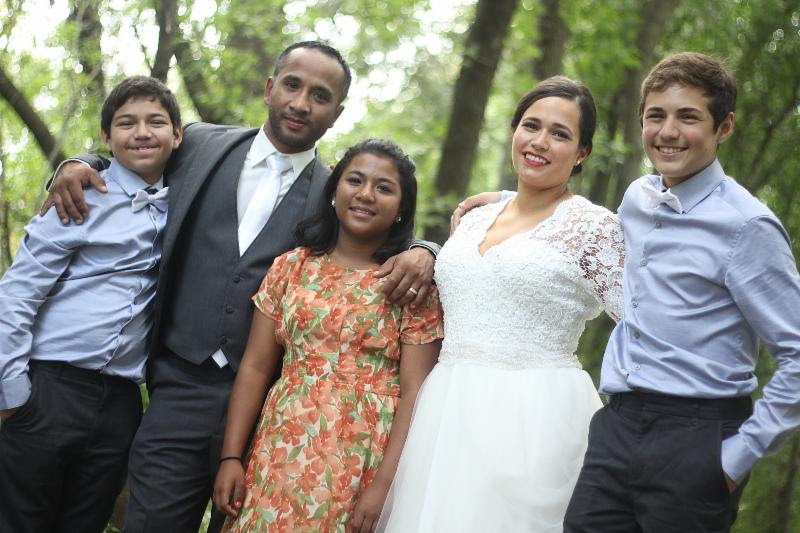 Ched, Jenny, and three of their kids on their wedding day.

Farmington, Minn. (Oct. 7, 2016) — A Minnesotan for nearly all his life, Farmington resident Ched Nin is awaiting deportation to a country he has never set foot in.
During a routine check-in with Immigration and Customs Enforcement (ICE) this August, Ched was detained for possible removal to Cambodia because of a criminal conviction from 2010 that he already served his time for.
Ched came to the U.S. as a refugee child, and after a troubled young adulthood he turned his life around. He is the primary provider and caregiver of his U.S. citizen wife, five kids, and elderly parents, and a member of the Minnesota Carpenters Union Local 322. He was part of the team that built the Vikings U.S. Bank Stadium, and he volunteers at the local Buddhist temple and at the annual Pride Parade. Yet Ched faces mandatory deportation to the country his parents once fled from in fear.
“Every year we see Cambodian refugee families reeling from the shock of deportation,” said Quyen Dinh, executive director of the Southeast Asia Resource Action Center (SEARAC) in Washington, DC. “Refugee families who survived starvation and genocide are re-traumatized when their sons and daughters are deported, especially elders and young children who depend on their care. Laws that mandate family separation do not keep us safe – instead they sweep the rug out from under a vulnerable population of people.”
Two laws passed 20 years ago in 1996, the Illegal Immigration Reform and Immigrant Responsibility Act (IIRIRA) and the Anti-Terrorism and Effective Death Penalty Act (AEDPA), made it nearly impossible for lawful permanent residents and refugees like Ched with old criminal records to fight deportation. The laws stripped power from immigration judges to evaluate on a case-by-case basis whether deportation is a just outcome for anyone with a wide range of old convictions, from shoplifting to controlled substance offenses. The laws were part of a wave of “tough on crime” policies in the mid-1990s that resulted in a surge of incarceration and deportation rates.
Ched was born in a Thai refugee camp after his parents fled the Khmer Rouge genocide in 1979. He and his family resettled in Minnesota when Ched was only six years old. Like many Cambodian refugee youth suffering from generational trauma, urban poverty, school bullying, and lack of support during the resettlement process, he made some wrong turns and ended up in the criminal justice system. Since serving his sentence, Ched has focused on building a stable career, and raising his children, and giving back to the community. But in 2012, just as he was getting his life back on track, he was served with a final order of removal to Cambodia. He has been living in limbo until ICE detained him in August.
Ched’s family is living in grave fear of his potential deportation. Last year, Ched married his childhood friend, Jenny, and a month later, they purchased a home together. Ched raises Jenny’s two boys and shares joint custody of his three daughters with his ex-wife. Recently, child protective services launched an investigation of Ched’s ex-wife and found that her home was unsanitary and uninhabitable. This investigation was prompted by the girls’ poor attendance record at school. If deemed an unfit mother by the family court, the girls are at risk of entering the foster care system if Ched is deported, as they have no other relatives who are able to care for them. Ched’s family would also risk losing their home.
Because of his steady work as a union carpenter, Ched is the primary provider of financial and medical care to his family. His 14-year-old daughter, Viance, has a serious heart condition and has already undergone three surgeries. Doctors believe that she will not live past the age of 25, unless advances in medical technology can extend her life. In addition, Ched also serves as the primary caregiver of his now disabled father, a lawful permanent resident.
“My family is struggling both emotionally and financially with Ched’s absence,” said Jenny Srey, Ched’s wife. “He is a wonderful husband and father, our family’s rock. We miss him every day. Along with the seven other Minnesota Cambodian families who may lose a loved one to deportation, we are fighting this. We just keep fighting.”
Profiles of MN Cambodian families fighting deportation