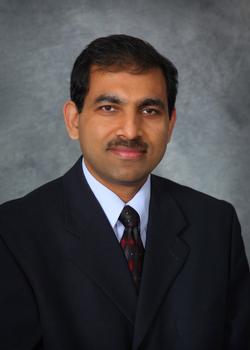 GRAND FORKS, N.D. (Aug. 21, 2017) — Brij Singh, Ph.D., professor and assistant dean for research at UND’s School of Medicine and Health Sciences (SMHS) and professor in the School’s Department of Biomedical Sciences, has received the first-year portion ($330,125) of a five-year, $1.65 million R01 grant for a project entitled “Epigenetic Regulations in Sjogren’s Syndrome” through the U.S. Department of Health and Human Services and the National Institutes of Health.

Sjogren’s Syndrome is an autoimmune disease that affects primarily moisture-secreting glands, especially in women over age 40. The syndrome’s most common early symptoms are dry eyes and mouth. Dr. Singh’s project seeks to understand how epigenomic changes in specific genes over women’s lifetimes affects the activation of immune cells that result in Sjogren’s Syndrome.

Epigenomics is the study of the epigenetic modifications (changes in the traits a person’s genes express that cannot be attributed to DNA) on the genetic material of a cell.

“Sjogren’s often occurs in conjunction with other autoimmune disorders such as rheumatoid arthritis or lupus,” explains Dr. Singh. “It seems that as some people age, especially some genes on the X-chromosomes—females have two X chromosome and one of them is randomly inactivated—begin to ‘lose control’ of their inactivation mechanism for a number of reasons, including epigenetic changes. Thus, the long-term goal of this project is to elucidate the role of epigenetic regulations in the onset of Sjogren’s.”

If left undiagnosed and untreated, the syndrome results in certain cancers, lymphoma in particular, in more than 50 percent of patients. Researchers estimate that more than 1 million people around the world are affected by Sjogren’s, with many never knowing they have the condition.