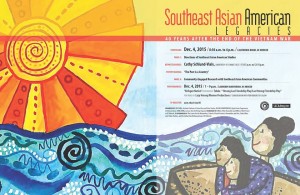 MERCED, Calif. (Nov. 23, 2015) — What do we do with our memories? That’s a question the University of Merced is asking at their symposium on Friday, Dec. 4, questioning four decades since the end of the conficts in Southeast Asia.

Free to the public, “Southeast Asian American Legacies: 40 Years After the End of the Vietnam War” will bring acclaimed voices and experts from across the country to examine this significant era. Scholars, community members, and artists will all be on hand to share their distinctive perspectives on the Vietnam War and its human legacies. As noted by the organizers “2015 marks the 40th anniversary of the Fall of Saigon, the end of a war that claimed the lives of an estimated 58,260 American troops and over 4 million Southeast Asians across Vietnam, Laos, and Cambodia.

Even 40 years after the war, Vietnam continues to haunt politics and society from debates about foreign policy to popular culture.” The topic has become particularly timely as the US and other nations face a new refugee crisis.

Cathy Schlund-Vials of the University of Connecticut, and president-elect of Association for Asian American Studies, will be the keynote speaker. A Cambodian American scholar, she holds a Joint Appointment as Associate Professor in the Department of English and the Asian and Asian American Studies Institute in the College of Liberal Arts and Sciences at the University of Connecticut.  She is also the director of the Asian and Asian American Studies Institute (UConn). In her research so far, her work has considered the collected and debated articulation of large-scale human loss and the ways artists reimagine alternative sites for memorialization, reclamation, and justice.

Minnesota playwrights May-Lee Yang and Saymoukda Duangphouxay Vongsay will come from the Twin Cities to present excerpts from their collaborative work, the Hmong-Lao Friendship Play OR Lao-Hmong Friendship Play. In Minnesota, the play sold out for almost of its performances.

Poets Mai Der Vang and Bryan Thao Worra will present a special reading at lunch, “The Past is a Secret Country.” Reading together for the very first time, they will examine the multiple intersections between geography, history, conflict and memory to construct a meaningful legacy even when so much of their shared journeys are obscured by secrecy. Mai Der Vang’s work recently appeared in the New York Times. Bryan Thao Worra’s latest book, DEMONSTRA, received Book of the Year from the Science Fiction Poetry Association.

“This year is also significant for the Lao community because it marks the 20th anniversary of the SatJaDham Lao Literary Project, an influential network of Lao artists and writers in diaspora during the early years of our reconstruction,” Thao Worra said.

The Central Valley is home to one of the largest concentrations of Southeast Asians in the country.

Los Angeles-based TeAda Productions will present excerpts of Refugee Nation. The play came to Minnesota in October, 2010 at Intermedia Arts to great acclaim for the touching way it addressed memory, identity, hope and the ongoing search for answers and justice since the end of the Vietnam War.

There’s still time to register at: