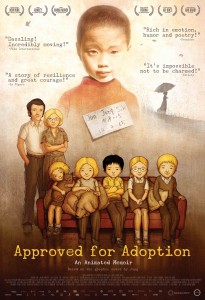 The screening occurs with the observation of the week commemorating the Korean War, which lead to the early beginnings of South Korean children being sent for adoption overseas.

The film’s original title was “Couleur de peau: miel”. It is an animated autobiographical documentary that traces the unconventional upbringing of the filmmaker Jung Henin, one of over 200,000 Korean children adopted by Western families after the end of the Korean War.

It is the story of a boy stranded between two cultures. Sepia-toned animated vignettes – some humorous and some poetic – track Jung from the day he first meets his new blond siblings, through elementary school, and into his teenage years, when his emerging sense of identity begins to create fissures at home and ignite the latent biases of his adoptive parents.

Belgian/French filmmaker and graphic novelist Jung Henin, tells his story using his own animation intercut with snippets of super-8 family footage and archival film. The result is an animated memoir like no other: clear-eyed and unflinching, humorous and wry, and above all, inspiring in the capacity of the human heart.

Henin’s own life experiences are the basis of the film, and will be present to engage in a community dialogue after the screening.

The film depicts complex experiences intimately familiar to individuals adopted transnationally and their families – experiences we are just now learning how to talk about. This is of particular interest to Minnesota, which is home to one of the highest populations of adopted Koreans in the United States.

Rainbow World, a Minneapolis-based nonprofit with a global vision to help cultivate understanding about the complexities of international adoption through multimedia. Proceeds from the film will benefit the organization’s development of an academic curriculum to facilitate use of the film in educational settings.

“I am an individual who was adopted internationally from South Korea and I know these complexities intimately,” said Jennifer Arndt-Johns, founder and director of Rainbow World. “Jung’s story will resonate strongly with the community here.”

“The audience responded with tears, a standing ovation and deep appreciation for the filmmakers’ work,” Arndt-Johns said.

“In its most transcendent form, film inspires us to reflect universally upon our collective existence and compels us to consider the unique circumstances that define our connections to each other as human beings and that is why this film is so truly remarkable,” she added.

Advance tickets are available at https://rainbowworld.yapsody.com Ticketing levels are $25, $50, and $150 with limited seating available on a first come first serve basis.