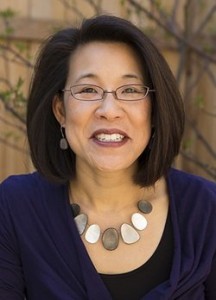 Lee’s new work is described by the publisher as a definitive history of Asian Americans, who over the past 50 years have helped change the face of the United States and are now the fastest growing group. However, Lee Asian Americans also have been present for centuries in America and she summarizes these vase stories into one brief history from the arrival of the first Asians in the Americas to the present-day.

Generations of Asian immigrants and their American-born descendants have made a live in the United States, from the first sailors who came on the first trans-Pacific ships in the 1500s, to the indentured “coolies” who worked alongside African slaves in the Caribbean; to the Chinese, Japanese, Filipino, Korean, and South Asian immigrants who were recruited to work in the United States only to face massive racial discrimination from Asian exclusion laws, and for Japanese Americans, incarceration during World War II.

Over the past fifty years, a new Asian America has emerged out of community activism and the arrival of new immigrants and refugees. No longer a “despised minority,” Asian Americans are now held up as America’s “model minorities” in ways that reveal the complicated role that race still plays in the United States. Yet, the diversity and differences among the Asian and Pacific Islander groups in America varies as much as the tapestry of all racial and ethnic groups in the country today.

Published to commemorate the fiftieth anniversary of the passage of the United States’ Immigration and Nationality Act of 1965 that has remade our “nation of immigrants,” The Making of Asian America presents an understanding of the American history of race and immigration and the role of Asian American studies.

Erika Lee is the granddaughter of Chinese immigrants who entered the United States through both Angel Island and Ellis Island. She grew up in the San Francisco Bay Area and received her Ph.D. from the University of California at Berkeley. She teaches history at the University of Minnesota, where she is also the Rudolph J. Vecoli Chair in Immigration History and Director of the Immigration History Research Center. She is the author of The Making of Asian America, Angel Island (with Judy Yung), and At America’s Gates.