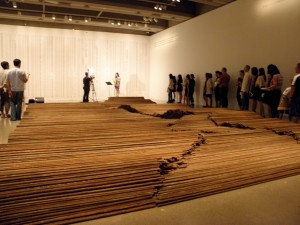 Volunteers line up to read the names of the children who died in the 2008 Sichuan Earthquake in the Toronto Arts Gallery of Ontario’s “Read Their Names, Remember” performance on Aug. 18. In the foreground is one of Ai weiwei’s art work, “Straight”, made up fo 38 tons of steel wires taken from actual buildings that collapsed in the earthquake. (Photos by Bob San)

TORONTO (Aug. 18, 2013) — The Art Gallery of Toronto (AGO) performance of “Staged: Say Their Names, Remember”, part of the Ai WeiWei “According To What?” exhibition, drew 300 volunteers to read in a special performance on Sunday.

On May 12, 2008, a massive earthquake in China’s Sichuan province took the lives of approximately 90,000 people, including more than 5,200 school children. The government covered up the numbers of people who died and refused to release their names.

Ai Weiwei launched a “citizens’ investigation” and posted the names of the children who passed away on his website. The Chinese government immediately took these names offline.

Undeterred, Ai Weiwei created two works of art: Names of the Student Earthquake Victims Found by the Citizens’ Investigation (2008 – 2011), a wall with the young victims’ written names, and Remembrance (2010), an audio recording of their names. In 2010, Ai Weiwei put a call out on the internet asking people to remember the children by saying their names.

The AGO did just that with “Remember” performance, directed by Toronto artist Gein Wong. In groups of 10 to 15 people, the volunteers of mostly Toronto Chinese Canadians and non-Asian supporters took their turn on a podium and read the names of about 5,200 victims over nearly five hours.

As the reading continued patrons viewed the names, ages, gender and grades of the school children who died, all pasted on a 45×15 foot wall next to the podium.

The hall also houses Ai’s art works, including “Straight” a display of 38 tons of steel wires taken from actual buildings that collapsed in the earthquake. The wires were twisted when Ai purchased them but his workers straightened them and he mapped the rusted rods into stacks of varying heights — from a few inches to a foot or so off the floor.

“Say Their Names, Remember” was a quiet, non-political, moving and solemn ceremony of the life of the young victims. 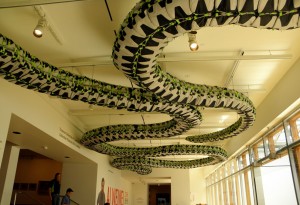 Ai Weiwei’s Snake Ceiling, a serpentine form made from children’s backpacks, is currently on display in Ontario.

“It’s so important and powerful that each and every one of you has chosen to the be part of this event,” Wong said. “It’s a testament to how much

compassion and empathy we have for human life, how important it is to pay our respects, and how much we need to remember those who are no longer with us.”

Wong said the special performance had the blessing of Ai, who is under 24-hour surveillence by the Chinese government and not allowed to travel outside China.

“Ai Weiwei is truly excited about this performance and he is pleased that we are doing this event in Canada,” Wong said. “A few days ago, I invited him to

watch the livestream on the AGO website. Although he can’t be with us at the AGO, he is with us in spirit.”