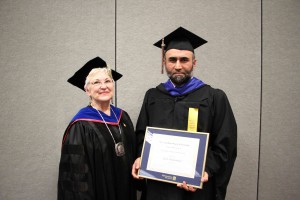 Yasir Muhammad was chosen outstanding M.B.A. student in the university’s College of Management. He was a member of Metropolitan State’s Student Parent Center and Walkabout group.

Muhammad is a principal engineer at Saint Jude Medical at the company’s Plymouth office. He previously performed engineering, quality and other professional duties for Boston Scientific, Ford Motor Company and Visteon Corporation. Muhammad has numerous professional certifications, including three from the American Society for Quality, where he is a member.

He serves on the board of the North West Islamic Community Center, Plymouth. He also volunteers for the Osseo-Maple Grove Hockey Association.

Future plans for the married father of two include pursuing a manager-level position.