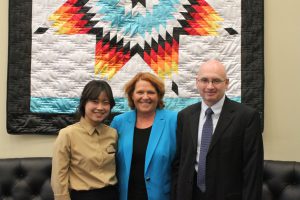 Minot, N.D. (May 16, 2016) — Jin Hee Choi, Minot State University chemistry major, was selected as a winner in a national competition to participate in the Posters on the Hill event sponsored by the Council on Undergraduate Research.

Choi, a native of Taean, South Korea, was one of 60 undergraduate students from across the nation who presented their research to members of the United State Congress on April 20. It is the sixth time that one of Chemistry Professor Mikhail Bobylev’s IDEA Network of Biomedical Research Excellence student researchers was selected. The previous winners from Bobylev’s lab included Kaylee Dockter (2015), Kowan O’Keefe (2014), Braden Burckhard (2013), Zane Young (2010) and Steven Lewis (2009). 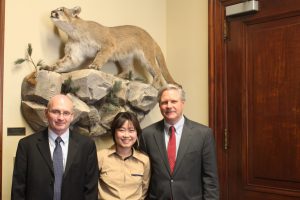 “I had the opportunity to introduce my research to North Dakota’s two senators, and it was enjoyable to meet them because of their friendliness and the interest they showed in my project,” Choi said. “I also saw stimulating research conducted by the other students. I really enjoyed the interaction I had with other students who were selected, professors and American Chemical Society representatives and government officers who came to my poster session.”

During the poster presentation, Dockter and Bobylev met with Allison Campbell, ACS president. ACS is the world’s largest professional society that promotes and supports chemistry and its practitioners. They also met with Dr. Krishan Arora, program director at the National Institute of General Medical Sciences of the National Institutes of Health. Arora administers the IDeA Networks of Biomedical Research (INBRE) component of the Institutional Development Award (IDeA) program.