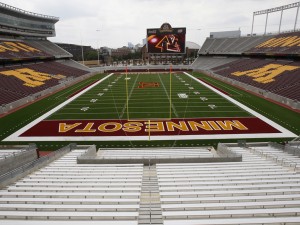 The University of Minnesota football stadium, where the NFL Minnesota Vikings will play this season’s home games.

WASHINGTON, D.C. (Aug. 7, 2014) — The University of Minnesota doesn’t want to put itself in the position of hosting the “Washington Redskins” of the National Football League at its university stadium when the team visits to play the Minnesota Vikings in October.

UofM President Eric Kaler addressed the impending visit of the Washington NFL franchise to the league and to U.S. Rep. Betty McCollum (MN-4), who is the Democratic Co-Chair of the Congressional Native American Caucus. He wants the team to wear “throw-back” uniforms at the game. which pre-date the use of the logo depicting a Native American in headress.

McCollum responde with a public statement that said the decision is consistant with the UofM’s reputation as a world-class institution of higher education that is dedicated to making diversity, equity, and social justice universal values.

“The presence of the Washington NFL franchise and their racist name on Nov. 2, 2014 at TCF Bank Stadium tests those values,” McCollum said. “I am pleased that President Kaler is fully engaged in discussions with the Vikings and is appropriately concerned about Dan Snyder’s refusal to change this offensive mascot.

Dan Snyder, the owner of the NFL’s “Washington “Redskins”, released a letter in March that ignored calls to change his team’s racist name while announcing that it had caucused with Native Americans who did not object to the name.

Several Congressmen and women, and President Barack Obama have urged the NFL and the team to change the mascot. The U.S. Patent and Trademark Office canceled the “Washington Redskins” trademark registration in June, for violations of racist name or logo policies, which removes any copyright protections the team and league had held.

“For almost 80 years the National Football League and its Washington franchise have exploited a racist Indian caricature, turning it into a billion dollar brand while completely ignoring the needs of real Native American children, families, and elders,” McCollum said in July. “Now, team owner Dan Snyder wants to keep profiting from his team’s racist brand and use those profits to attempt to buy the silence of Native Americans with a foundation that is equal parts public relations scheme and tax deduction.

“The NFL and its Washington franchise’s legacy of exploitation of Native American identity is real as has been noted by tribal leaders, national Native American organizations, journalists, and Members of Congress. Dan Snyder should immediately change the racist name of his NFL team and then commit a portion of his profits to addressing the issues facing Native American communities across the country.”