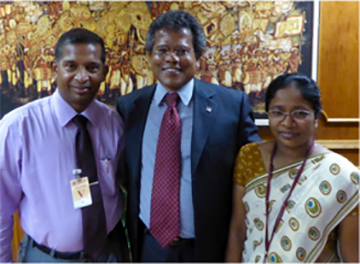 After his recent lecture at the Central Bank of Sri Lanka in Colombo, Prof. Patrick Mendis, center, met with two of his award recipients—now a senior lecturer and a public servant—at the University of Sri Jayewardenepura, their alma mater. (Contributed photo)

“When you are a small investor with a social purpose, a donor advised fund is the best alternative to a foundation,” Mendis said.

An alumnus of Harvard, Prof. Mendis is serving as a Rajawali senior fellow at the Harvard Kennedy School of Government and an advisor to the Harvard International Review.

In March 2015, Mendis established The Millennials Award for Leadership and Service at Harvard University. He provides this annual award with a grant through his ImpactAssets donor advised fund.

The award recognizes the outstanding leadership and service of an international relations student and supports a future writing, journalism, or media project. This year recipient Daniel Epstein of the Harvard International Relations Council used the award money to carry out his summer research in Turkey.

Giving back to universities is a tradition of his cultural belief and social upbringing in Minnesota and Sri Lanka, his native country.

“This is my way of saying thank you for investing in my education,” said Mendis who funded his education through scholarships and fellowships.

Through his ImpactAssets donor advised fund, Mendis also established The Edward Burdick Legislative Award at the University of Minnesota in honor and memory of his late mentor and friend at the Minnesota House of Representatives in St. Paul.

When the tragic Asian tsunami happened, he was looking for a way to make small contributions to help rebuilding his island nation in the Indian Ocean.

“When I was teaching at the University of Maryland, I learned about the Calvert Foundation and its reputation as socially responsible in investment for the greater good. It truly appealed to me,” said Mendis, who served as an American diplomat and a NATO military professor during the Clinton and Bush administrations. He is currently a commissioner of the U.S. National Commission for UNESCO at the U.S. State Department, an appointment by the Obama administration.

With his book sales, speaking engagements, and fundraising activities, Mendis established a number of scholarships, including a Sarvodaya Peace Prize in Sri Lanka.

When he was asked to serve as the founding chairman of the board of advisors at Educate Lanka Foundation in Maryland, Mendis decided to focus on giving to his two American universities in Boston and Minneapolis while Educate Lanka provides micro-scholarships to students in Sri Lanka.

Mendis said that he believes the scholarships and fellowships provided by Harvard and the University of Minnesota allowed him to “walk on the shoulders of remarkable American leaders” in government and academia to serve others.

In sum, Mendis describes his philanthropic work as an effort to “make a small difference in the lives of our millennials at Harvard and Minnesota; you never know what impact a grant recipient could have—it could be greater than you imagine.”