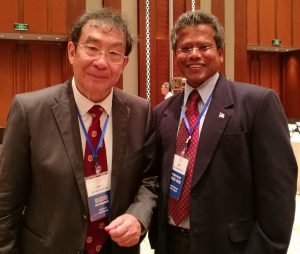 Prof. Tu Weiming of Peking University, left, and Prof. Patrick Mendis of Harvard, the keynote speakers at the Eighth World Confucian Conference held recently at the Shangri-la Hotel in Qufu.

QUFU, Shandong (Oct. 22, 2017) — Prof. Patrick Mendis, an associate-in-research of the Fairbank Center of Chinese Studies at Harvard University, was a keynote speaker at the 8th World Confucian Conference held at the Shangri-la Hotel in Qufu.

Over 300 scholars from more than 30 countries attended the three-day event. High-ranking officials from the central, provincial, and local governments participated at the opening ceremony in the National Confucius Research Institute of China in Qufu.

Professor Mendis is a visiting researcher at the National Confucius Research Institute, a senior fellow of the Pangoal Institution in Beijing, and a distinguished visiting professor of Asian-Pacific affairs at Shandong University in Jinan. He has visited all the provinces of China and lectured at more than 25 Chinese universities — including Fudan, Hong Kong, Nanjing, Peking, Renmin, Tongji, Tsinghua,  Wuhan, and Zhejiang.

The professor has authored more than 100 books, articles, and government reports. Most recently, he is the author of “Peaceful War: How the Chinese Dream and the American Destiny Create a Pacific New World Order,” which is also published in Mandarin Chinese.

“The confluence of Confucian heritage and Chinese culture had a remarkable influence on American founding fathers,” said Professor Mendis. He is the author of two noted books — “Trade for Peace” and “Commercial Providence” — on American history and political governance.

“Dr. Benjamin Franklin is America’s Confucius. He and other founding leaders of the United States such as Thomas Paine and Charles Thompson wrote about Chinese culture, its civilized people, and Confucian ideas,” Mendis said.

After having the American Revolution and the 1812 War with their mother country of England, the founding generation of the United States looked to China for inspiration, Mendis said.

With the Louisiana Purchase from France, President Thomas Jefferson searched for a short-cut to China through the Columbia river-navigation to Seattle for “the purpose of commerce.”

In his keynote speech on Confucian heritage and its destiny in America, Mendis further pointed out the public display of Confucius along with Moses and Solon as lawgivers on the U.S. Supreme Court building in Washington, D.C.

This is significant to the United States as a global nation, he added. While the Western philosophical traditions signify law and order, the Confucian morality and human virtues are critically important for republican governance. Professor Mendis then illustrated these points by the writings of Franklin, Paine and Thompson.

Even today, there is a new revival of Confucian ideals and Chinese culture in the minds of many Americans as there are more than 100 Confucius Institutes in universities and colleges in almost every state in the United States, Professor Mendis said.