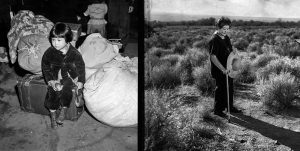 ST. PAUL, Minn. (April 29, 2017) — “‘Gambatte! Legacy of an Enduring Spirit’ Japanese American WWII Incarceration, Then & Now,” runs May 27 through Oct. 28, 2017 at Historic Fort Snelling. The exhibit will be on display for free in the visitor center. Admission to the historic fort is separate.

Pulitzer Prize-winning photographer Paul Kitagaki Jr. has put together this exhibit by juxtaposing historic photographs of Japanese-Americans taken during World War II with contemporary portraits he took of the same individuals or their descendants. The historic photographs were taken by War Relocation Authority photographers and include images by Dorothea Lange and Tom Parker, as well as images by Ansel Adams who photographed people at the Manzanar incarceration camp.

This exhibit provides a visual exploration of the Japanese concept of gambatte, or to triumph over adversity, and chronicles the legacy of Japanese-Americans who persevered over their incarceration during World War II. This display of past and present images also highlights an often-overlooked chapter of U.S. history.

The exhibit is available during regular open hours. The fort opens for the summer season on Memorial Day Weekend with a number of programs, including tours, family activities and an exploration of different eras of U.S. military history as presented through costumed history players. In addition, visitors can take in a special exhibit inside the fort walls, “Patriot Nations: Native Americans in Our Nation’s Armed Forces,” to learn about the remarkable history of the brave American Indian and Alaska Native men and women who have served in the United States military.

Historic Fort Snelling is located near the MSP airport at the intersection of Hwys. 5 and 55 overlooking the Mississippi and Minnesota rivers. Originally an 1820s Army outpost to protect U.S. interests in the fur trade, the fort and surrounding buildings were later used for military training from the Civil War through World War II. Human history in the area dates back at least 10,000 years. Historic Fort Snelling is Minnesota’s first National Historic Landmark and a member of the International Coalition of Sites of Conscience.

The Minnesota Historical Society is a non-profit educational and cultural institution established in 1849. MNHS collects, preserves and tells the story of Minnesota’s past through museum exhibits, libraries and collections, historic sites, educational programs and book publishing. Using the power of history to transform lives, MNHS preserves our past, shares our state’s stories and connects people with history. Visit us at mnhs.org.