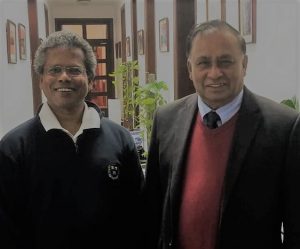 BEIJING(Nov. 7, 2018) — The University of Minnesota and Harvard-trained scholar Patrick Mendis, Ph.D., joins the Yenching Academy of Peking University as a distinguished visiting professor of Sino-American relations.

Mendis teaches a post-graduate seminar on the International Political Economy of Sino-American Relations.

Born in Sri Lanka but attended high school in northern Minnesota, he began his journey from “a mud house to the White House” and then to international diplomacy, said Ambassador Karunasena Kodituwakku, the Sri Lankan envoy to the People’s Republic of China in Beijing.

Mendis is an honors graduate of the University of Sri Jayewardenepura and its management school has established “The Dr. Patrick Mendis Prize” presented annually to an outstanding student at the graduation. Mendis attended the university when Kodituwakku served as its president.

Mendis is currently serving as a commissioner of the United States National Commission for UNESCO at the Department of State. It is an appointment by the Obama White House. Previously he has worked in the United States government during the Reagan, Clinton, and Bush administrations.

A fellow of the World Academy of Art and Science, Mendis has traveled to and worked in more than 125 countries, all of China’s provinces, and every state in America. He brings “a wide range of government experiences as a former American diplomat, United States Senate staffer, and NATO-Pacific Commands military professor in Japan and South Korea . . . [in addition to] his international experience in the World Bank and the United Nations,” according to a statement from Yenching Academy.

An alumnus of the Harvard Kennedy School of Government, Mendis later served as a Rajawali senior fellow of the Kennedy School and a research associate of the Fairbank Center for Chinese Studies at Harvard. An advisor to the Harvard International Review, Mendis established “The Millennials Award for Outstanding Leadership and Service” at Harvard University.

At the University of Minnesota, he also endowed “The Edward Burdick Legislative Award” in honor of his mentor and friend of the Minnesota House of Representatives, where Mendis once worked as a legislative assistant. 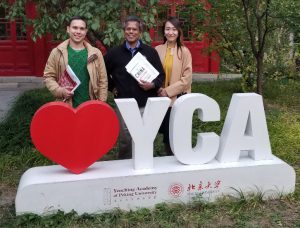 Trained as a Confucius fellow of China, Mendis is a senior fellow and academic adviser to the Pangoal Institution, a global think-tank in Beijing. He has lectured at over 25 Chinese universities and academies, including the Anhui, Guangdong, Hunan, Fudan, Nanjing, Peking, Renmin, Shandong, Tsinghua, Tongji, Wuhan, Xi’an and Zhejiang Universities, as well as the Shanghai Academy of Social Sciences and the Chinese Academy of Social Sciences.

In his seminar at Peking University, Yenching scholars examine the co-evolution of the Chinese and American political economies and evolving bilateral relations, with special reference to governing philosophies that seemingly point to universal values in humanity. He engages students in debates, role-playing exercises and “trade-war” simulation to gain critical thinking and real-world experiences in the classroom setting.

Modeled after the Rhode scholarship program at Oxford University in England, the Yenching Academy offers a prestigious, interdisciplinary Master of the Arts program in China Studies taught primarily in English. The Academy brings together about 125 exceptional Chinese and outstanding international students from more than 40 different countries each year, who become full-time students of Peking University. The scholars participate in classroom learning, field-study tours, and self-designed research trips.

The Yenching Academy provides a generous scholarship to all admitted students, covering tuition fees, a travel stipend for one round-trip journey between each scholar’s home base and Beijing, campus accommodation and living costs at Peking University.