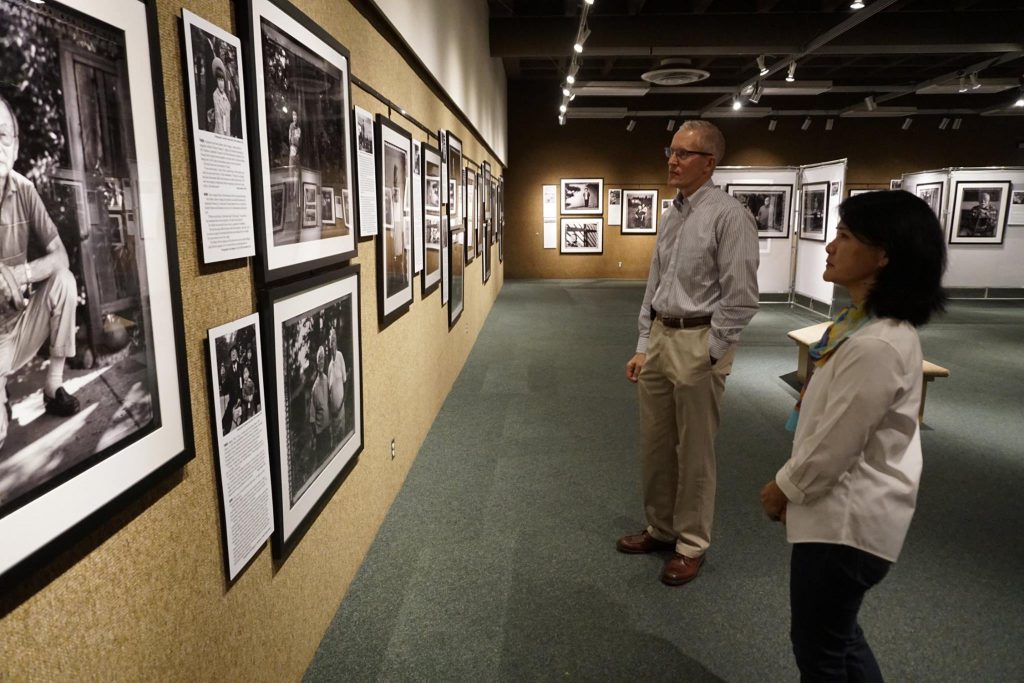 FORT SNELLING, Minn. (Sept. 17, 2017) — When Paul Kitagaki Jr found National Archive photos of his grandparents, father and an aunt departing to an inprocessing center and eventual detention in a Japanese American internment camp in 1942 — it started a 30 year project to record the experiences of internees, their thoughts on that time and how it impacted their lives since then.

Fort Snelling Visitor Center is hosting the photo exhibition “Gambatte! Legacy of an Enduring Spirit — Japanese American WWII Incarceration, Then & Now.” It is free and open to the public from 10 a.m. to 5 p.m. on Saturdays through Oct. 28, 2017.

Cheryl Hirata-Dulas, a member and past president of the Twin Cities chapter of the Japanese American Citizens League, said it took three visits to go through the more than 40 photo panels of 50 individuals because it was so emotionally powerful.

“I think it’s a very personal story,” Hirata-Dulas said. “We have learned about what happened and all of the facts but this really grabs you from the heart.”

When President Franklin Roosevelt signed Executive Order 9066 in February 1942 the action relocated 120,000 west coast Japanese Americans who lost their homes and businesses as they were moved to inland internment camps for much of the war.

According to exhibit information, War Relocation Authority photographers Dorothea Lange, Clem Albers, Tom Parker and Francis Stewart recorded the movement of Japanese Americans as they were processed into the camps and throughout the war. The people in the photos were not identified and in an age before the Internet, Kitagaki started his search through camp records and identified people and belongings by number and by talking to others he knew were in the camps.

When Kitagaki would locate people who were in a photo, or their descendents if they had passed on, he photographed them again using the same large frame portrait cameras that were used in the original 1942 photos to capture the same level of resolution and detail. A Pulitzer Prize-winning photographer himself, Kitagaki’s exhibit juxtaposes the original photo with the contemporary portrait and sometimes the same setting.

The panels also tell the story of the original photo and what the people had done before incarceration. The internment devastated some families who had to start again with nothing, while others said the irony of the unjust action actually created opportunities after the war.

Kitagaki interviewed survivors who told him stories that they never told their own families, Hirata-Dulas said. Some of the families actually asked him for the transcripts because they had never heard the stories told like this, she said.

“For these people it must have been a relief to be able to share with somebody all these feelings and their histories and the impact on them,” she said. “I don’t know the feelings they had but it’s an amazing exhibit that he is able to do and to have us be a part of it.”

There are familiar themes throughout the panels such as the term “shikata ga nai,” a Japanese phrase meaning that something cannot be helped or be done about it. Others commented about the possibility that internment could happen again in America. Some felt an obligation to speak out, while others said it is already happening again with the War on Terror.

“It really does speak not only to history then, but history now with the things that are happening,” said Tom Pfannenstiel, site manager of Historic Fort Snelling.

As he organized the Gambatte (a Japanese term for ‘don’t give up’) exhibit, Pfannenstiel said the photos and stories were so moving that he paused his work at times.

Kitagaki told him about the photos of his family that “drove it home,” he said. A woman in one photo is talking to Kitagaki’s family, he said. She is offering to take their belongings while they were interned, he said.

In another photo three elderly men stand together next to the photo of them as boys in an internment camp where they are saluting a flag during a ceremony.

“The three men all lived within a short distance from each other in the same town and didn’t know it until Paul contacted them,” Pfannenstiel said. “It is those types of things that show Paul has gone through a lot to get this to work.”

Many visitors who signed the exhibit guest book left lengthy entries about what they learned or felt while viewing the panels, Pfannenstiel said. People said they were moved by the stories about how people faced and overcame adversity in the camps and still led successful lives after the war, going on to become scientists, business owners and artists.

This is the third project that Fort Snelling Visitor Center and the Twin Cities JACL have collaborated on, he said. It is part of the ongoing community engagement team effort to meet with communities that were involved with or affected by Fort Snelling as it approaches its bicentennial in 2020.

This includes dialogues with African American and immigrant communities, veterans groups and descendents of the Dakota and Flandreau Santee Sioux Indians who fought the U.S.-Dakota War of 1862, he said. Several recent events are showing progress in ensuring these communities will be part of telling stories of often painful chapters in Fort Snelling’s history.

The Communities of Compassion project will be the next collaboration of the Twin Cities JACL and Fort Snelling Visitors Center. Set for mid 2018 the exhibits will tell the story Minnesota played in making it possible for Japanese Americans to relocate here during World War 2 and to leave the internment camps.

Minn. Gov. Harold Stassen made it possible for the Military Intelligence Service Language School to move to Camp Savage in 1943 and then to Fort Snelling in 1944. More than 6,000 Japanese Americans learned to become military translators, interrogators and intelligence workers.

Macalester College accepted students from the internment camps. There were other organizations that made it possible for internment camp internees to move to Minnesota to perform domestic work, she said.