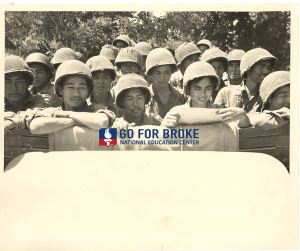 Under the guidance of the Sisters of St. Francis and colleagues from the Mayo Clinic, Saint Marys School of Nursing operated from 1906 to 1970 and admitted 42 Japanese American women from U.S. incarceration camps during WWII. For students like Teruko Yamashita, who entered the nursing school from the Gila River, Ariz. incarceration camp, Saint Marys School of Nursing offered a way out of camp, an opportunity for a free education, and a way to serve her country through the Cadet Nurse Corps. The exhibit will be shown at 1195 West Circle Drive SW, Rochester, Minn., Tuesday-Saturday from 9 a.m. to 5 p.m. For more information, please visit www.olmstedhistory.com.

The Twin Cities Japanese American Citizens League and Historic Fort Snelling will partner to host “Courage and Compassion” at Historic Fort Snelling’s visitor center from June 30 to Sept. 3, 2018. Once the location of the Military Intelligence Service Language School, Fort Snelling was important to the formation of the Japanese American community in Minnesota. Prior to WWII, about 50 Japanese Americans called the Twin Cities home. Immediately after Pearl Harbor, individuals of Japanese ancestry were placed under house arrest and members of the Twin Cities civic, social services, and religious organizations petitioned for their release. The exhibit will be shown at 200 Tower Ave., St. Paul, Minn., Tuesday-Friday, 10 a.m. to 4 p.m. and Saturday-Sunday from 10 a.m. to 5 p.m.  For more information, please visit www.mnhs.org/fortsnelling.

Funded in part by a grant from the National Park Service, “Courage and Compassion” covers events from the attack on Pearl Harbor to the fateful decision to incarcerate Japanese Americans in wartime camps to the postwar fight for redress. Visitors will learn about the Nisei (second-generation Japanese American) WWII experience and its legacy, engage with questions about what courage looks like during a time of crisis and consider the relevance to today’s society.

Mitchell T. Maki, Ph.D., President and Chief Executive Officer of GFBNEC, cited the courage shown by the Saint Marys School of Nursing and residents of the Twin Cities in speaking out for Japanese Americans during that turbulent time. “Both communities showed courage in the face of adversity,” Dr. Maki said. “These courageous people teach us that we cannot tolerate discrimination against individuals based on the color of their skin, the God whom they worship, or their country of origin. They exemplify the best that America has to offer.”

“Bringing this exhibit now to Fort Snelling, the actual site of the Military Intelligence Service Language School, is a compelling chapter in history with contemporary relevance,” Amy Dickerson, Twin Cities Japanese American Citizens League President, said. “Then-Governor Harold Stassen and the people of Minnesota were receptive to hosting the 6,000 Nisei soldiers who ultimately trained here while many other states were not. It is our hope people can view the exhibit and be inspired by it.”

Go For Broke National Education Center (GFBNEC) is a 501(c)(3) nonprofit organization that educates the public on the valor of Japanese American veterans of World War II and their contributions to democracy. Our goal is to inspire new generations to embody the Japanese American veterans’ core values of courage, sacrifice, equality, humility and patriotism. Founded in 1989, GFBNEC maintains the Go For Broke Monument and the interactive “GFBNEC’s Defining Courage Exhibition” in downtown Los Angeles, as well as extensive oral histories and archives, education and training programs, and other initiatives. For more information, please visit www.goforbroke.org.

Historic Fort Snelling is located near the MSP airport at the intersection of Hwys. 5 and 55 overlooking the Mississippi and Minnesota rivers. Originally an 1820s Army outpost to protect U.S. interests in the fur trade, the fort and surrounding buildings were later used for military training from the Civil War through World War II. Human history in the area dates back at least 10,000 years. Historic Fort Snelling is Minnesota’s first National Historic Landmark.

About the NPS JACS Program