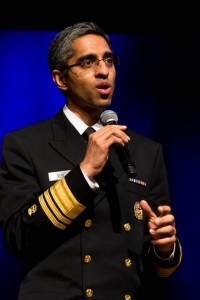 Surgeon General of the United States Dr. Vivek Murthy delivers remarks following the announcement of his appointment as Co-Chair of the White House Initiative on Asian Americans and Pacific Islanders, May 12, 2015. (Photo by Will Kim)

Every day, kids of all ages suffer from being bullied in schools across the country. In the Asian American and Pacific Islander (AAPI) community, this problem is often compounded by cultural, religious, and linguistic barriers that can keep AAPI youth from seeking and receiving help.

On Oct. 15, 2015, the White House Initiative on AAPIs, in partnership with the Sikh Coalition and the Coalition of Asian Pacifics in Entertainment, launched “Act To Change,” a public awareness campaign to address bullying, including in the AAPI community.  On Saturday, Nov. 21, 2015, Act to Change will host a Live Event at the Japanese American National Museum to announce new supporters joining the campaign.

The White House Initiative on AAPIs, co-chaired by Education Secretary Arne Duncan and Surgeon General of the United States Dr. Vivek Murthy, is housed within the U.S. Department of Education.

New “Act To Change” supporters and commitments include:

AdCouncil: As part of its “I Am A Witness” Bullying Prevention, AdCouncil is teaming up with #ActToChange to address youth bullying and encourage peer empowerment in the social and digital media space.  AdCouncil will be capturing photos and videos of the event via their Snapchat account “ISeeBullying” on November 21 to document the Live Event in Los Angeles and share the #ActToChange message with its Snapchat followers. In addition, AdCouncil is sharing #ActToChange multi-language infographics and resources on its “I Am a Witness” website and cross-posting #ActToChange on their social media platforms.

Amazin LeThi Foundation: In support of #ActToChange, the Amazin LeThi Foundation will host an event in 2016 focusing on anti-bullying and LGBT athletic equality, and will support the campaign on its social media platforms. Bodybuilder, HIV advocate, and Athlete Ally Global Ambassador Amazin LeThi will provide video content sharing her personal experiences about bullying.

Asian Cinevision: Asian Cinevision will support the campaign on its social media platforms as well as their weekly e-bulletin the week of the live event.

Teach For America: Teach For America will develop a blog campaign to elevate the voices of both teachers and former educators who have dealt with bullying, including bullying of AAPI students, in their classrooms.

Tyler Clementi Foundation: In continuing its effort to address cyber-bullying and the suicide of LGBT youth, the Tyler Clementi Foundation will support #ActToChange on its various social media platforms.  The Foundation, in collaboration with New York Law School, recently launched the Tyler Clementi Institute for Internet Safety, a first-of-its-kind direct service litigation clinic to help victims of cyberbullying and harassment for free.  In addition to being a pro bono clinic, the Institute will hold conferences, workshops, and host a hotline where victims can learn about their rights and seek justice.

For more information on the campaign, visit ActToChange.org

, is housed within the U.S. Department of Education.