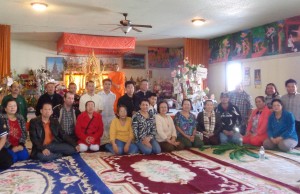 Staff from Lao Assistance Center in Minneapolis were in Warroad, Minn. on March 19-20, 2016, to discuss community issues with the more than 150 Lao, Hmong and Thai residents there at their Buddhist temple. (Photo by Jay Clark)

WARROAD, Minn. (March 22, 2016) — Staff from Lao Assistance Center of Minnesota office in Minneapolis traveled 300 miles north to visit with Warroad’s Laotian community in their Roseau County town on Lake of the Woods across from Middlebro, Ontario in Canada.

The Lao Assistance Center staff left a Minneapolis fairly warm and now free of snow and lake ice. As they traveled north, the terrain became increasingly snow and ice covered. By the time they reached Warroad the staff said they could see snowmobiles and ATVs criss-crossing Lake of the Woods, and fishing houses and even small fires dotting the surface.

The purpose of the trip was for Lao Assistance Center to assess what Warroad Laotians like about their community, and what they feel would make it a better place to live, and if possible to provide support or advocacy to help bring about that change.

The Lao Assistance Center staff met with the bordertown community at the Warroad Buddhist temple, a place where Warroad Laotians and Thai residents combined resources to build the temple as a place of worship but also a foundation building community. The residents recruited a Buddhist monk to come from Laos to Minnesota. 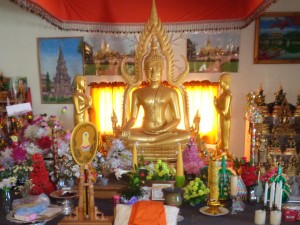 Inside the Warroad Buddhist temple. (Photo by Jay Clark)

Outside, the temple is in contrast to the wind-swept, snow covered farmland. Inside, a giant gold Buddha with flowers and tapestries are reminders of the parent culture and its warmer climates. Visitors and parishioners shared sticky rice, fish, and hot peppers prepared for the meeting.

The U.S. Census reports that around 151 residents of the approximately 1,800 population of Warroad are Asian. Most of this group has a Laos origin and of this group Hmong is predominant. Only about 20 percent of the Laotians in Warroad have come from the Twin Cities, according to residents, and most are originally from California and other sunbelt states and came for job opportunities at Marvin Windows and said they have never been laid off.

Warroad Laotians were overwhelmingly positive about their community and even insisted that they love the extreme weather. They said the hunting and fishing, affordability, lack of crime, nice neighbors, schools, and lack of traffic jams is unimaginable in an urban setting.

When ask what would make living in Warroad better, many of the Laotians said they had trouble being able to translate important documents and communicate with authorities. They especially pointed to tax forms and other government documents as posing a challenge. 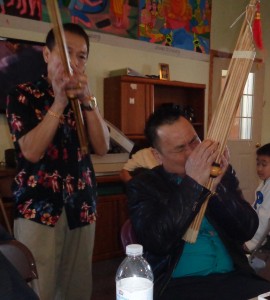 Hmong and Lao residents perform flute and keej music at the Warroad Buddhist Temple in Warroad, Minn. on March 20, 2016. (Photo by Jay Clark)

Two teachers from Warroad Public Schools came to the temple for meeting. There was Laotian music with dancing, singing that was a preview of a Laotian flute music performance for an April multicultural event.

Lao Assistance Center will be traveling back to Warroad several more times in 2016 to help the borderland community Warroad work on improving communications and other goals.