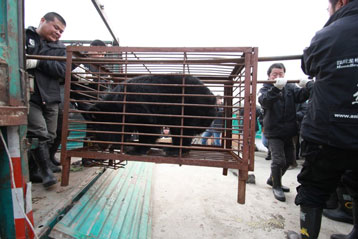 A bear is transported by Chinese authorities after it was rescued with five other bears from an illegal bile industry.

BEIJING (Jan. 9, 2013) — An AnimalsAsia press release announced that six bears were reportedly rescued from the bear bile industry will delivered Wednesday, Jan. 9 by the Sichuan Forestry Department to Animals Asia, the animal welfare organization that runs the only bear sanctuary in China.

The bears have come from an illegal farm in Sichuan province and are due to arrive at Animals Asia’s Chengdu sanctuary this afternoon. The rescue is a partnership between the Sichuan Forestry Department and Animals Asia.

More than 10,000 bears – mainly moon bears, but also sun bears and brown bears – are kept on bile farms in China, and around 2,400 in Vietnam. The bears are milked regularly for their bile, which is used in traditional medicine.

Bile is extracted using various painful, invasive techniques, all of which cause massive infection in the bears. This cruel practice continues despite the availability of a large number of effective and affordable herbal and synthetic alternatives.

Some bears are put into cages as cubs and never released. Bears may be kept caged like this for up to 30 years. Most farmed bears are starved, dehydrated and suffer from multiple diseases and malignant tumors that ultimately kill them.

The bears were delivered to the sanctuary during the afternoon. The Animals Asia team will first examine the integrity of the cages and reinforce them if necessary. The bears will then be fed fruit to relax them while the vet team examines their condition.

The bears will be numbered, offloaded from the truck, and transported to the quarantine area, where they’ll be given food, water and browse. Health checks are then conducted on all the bears which will involve anaesthetising the bears so their condition can be fully assessed.

At this stage, the extent of the damage to the bears can be assessed. The effects of being kept in cages, starved and dehydrated, and having their bile extracted can cause a range of ailments from skin damage to liver cancer.

Following the health check, the bears are transferred into more roomy recovery cages filled with straw. If emergency surgery is required, it is scheduled as soon as possible. The bears are monitored, fed and given appropriate veterinary care over the next few weeks. Learn more at http://www.animalsasia.org/