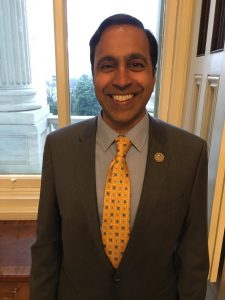 WASHINGTON, D.C. (Jan. 3, 2017) —  U.S. Rep. Raja Krishnamoorthi took the oath of office Tuesday as a new Member of Congress for the 8th District of Illinois and reaffirmed his focus on growing and strengthening the middle class.

“Standing up for the families of the 8th District means always being ready to listen and never forgetting that I’m here for them,” Krishnamoorthi said. “My offices in Washington and Schaumburg are now open, and these offices will be places where my constituents can be heard and find the help they need.”

Raja and Priya Krishnamoorthi live with their two sons in Schaumburg, Ill. He won the primary as the Democrat candidate for the open House seat and defeated Republican Pete DiCianni in the general election, becoming the first Hindu Indian-American to be elected to Congress.

“Thanks to the voters and support of so many friends and family, I am proud to now be able to represent the hardworking families of Chicago’s west and northwest suburbs in Congress,” Krishnamoorthi said. “I will continue to focus on the middle class and our commitment to ensure that hard work is rewarded. I am ready to join and lead the efforts to make sure that working families who play by the rules are not left off the agenda in Washington. I am humbled by the trust the people of our district have placed in me to fight for them in Congress.”