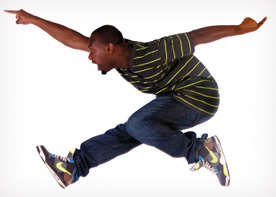 The Rennie Harris Pure Movement Dance Company, was founded by Dr. Lorenzo (Rennie) Harris in 1992. Raised in Philadelphia, Harris was exposed to an incredible and broad range of talented dance by watching kids on the streets extend their natural abilities.

The creative dances choreographed for the Ordway Performance conveyed metaphors about life, hope and love. Dancers wove together movements from hip-hop, jazz, ballet and tap into performances that bared one’s soul. Each performer enlisted a spirit of the unique hip-hop lineage. Through hip-hop, performers conveyed messages about the gift of the urban experience, as well as human connectedness through acceptance. The language of the uninhibited dances by dancers inspired, entertained and captivated the audience.

The following week, Ladysmith Black Mambazo, wowed audience members with a Grammy Winning experience. On a mission to spread global peace, their voices uplifted the sold out audience. With relaxed and playful attitudes, they mesmerized us with the beauty of many songs.

In the early 1960’s, Joseph Shabalala assembled a group of talented South African male acapella singers to spread messages of joy and peace through song. The initial intention of the music was to uplift a deeply oppressed South Africa towards cultivating hope. Now, fifty years later and a Grammy Award in 2014, the group continues to tour globally by bringing their heavenly harmonies to stage. Their continuous involvement in peace keeping efforts have brought them fame and recognition. Through song, pure happiness and joy, they have advanced the human race with such hits as, “Raise Your spirits Higher” and “Live: Singing For Peace Around the World.”

The lyrics communicate a need to put an end to resentment and hate, while reversing the catastrophic impact of racism and poverty. The spirit of the songs performed at the Ordway Theater, were upbeat, deeply touching and full of expectations regarding positive change. With audience participation, Ladysmith Black Mambazo surely raised a level of awareness and increased a presence of mindfulness. The Ladysmith Black Mambazo singers, empower individuals, systems and nations to organize efforts towards developing increased faith, hope and trust.