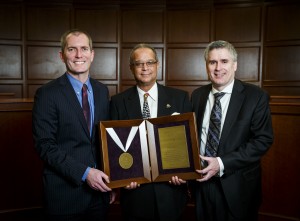 One of the highest awards given by the School of Law, the Iustitia et Lex Award is presented to a member of the Twin Cities community who embodies the School of Law’s mission in his or her professional life.

Fletcher, who has focused his career on addressing the economic and educational disparities that affect people of color and low-income citizens of Minnesota, was nominated for the award by Minnesota Department of Human Rights Assistant Commissioner Tim Flynn, a 2011 graduate of the School of Law.

“I have great hope for the American experience, and I resolve to continue to face the challenges before all of us with a commitment to be the change that I want to see happen,” Fletcher said while accepting the award. “We’re the most diverse country in the world. We have the most challenges, but we also have the most opportunities.”

Though Fletcher does not have a background in law, School of Law Dean Robert Vischer recognized Fletcher’s social justice work, emphasizing that the School of Law “tackles the most pressing issues facing law and social justice, and we can only do that as a community.”

“For lawyers, impact is in the details,” Vischer said at the event. “Readus has always kept his eyes on the big picture, without missing the details. Though he’s not a lawyer, I cannot think of a better model for future generations of St. Thomas lawyers.”