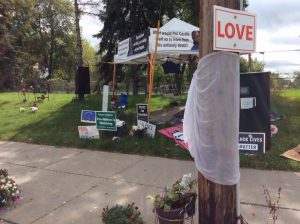 A memorial to Philando Castile still standing in September 2016, two months after the African American man was shot and killed by Jeronimo Yanez, a St. Anthony police officer. while pulled over for a traffic stop in Falcon Heights on July 6, 2016. Bob San is not pictured in the photo. (Tom LaVenture / Asian American Press)

MINNEAPOLIS  (June 16, 2017) — Several organizations and elected officials responded to Friday’s acquittal of Jeronimo Yanez, a former St. Anthony police officer who shot and killed Philando Castile, an African American man while pulled over for a traffic stop in nearby Falcon Heights on July 6, 2016.

The shooting and trial brought national attention with Castile’s final conscious moments captured on video by fiancé Diamond Reynolds who was in the vehicle along with her 4-year-old daughter.

Glenda Hatchett, attorney for Valerie Vastile, who is Philando Castile’s mother, said the verdict was incomprehensible. She said Castile went above and beyond Minnesota law by alerting the officer that he had a firearm.

“We all know how the story ended, him being killed,” Hatchett said. “These events weren’t based on hearsay or speculation; there was no difference of opinion where reasonable minds should have disagreed. We watched video and audio footage of Philando being gunned down in the presence of his girlfriend and her small child while fully complying with the officer’s request.”

Valerie Castile expressed her disappointment in the verdict saying that in her heart she believes her son’s death at the hands of Yanez was not justified.

“He was doing everything that I taught him to do to be fully compliant,” she said. “Even though Philando’s death was not vindicated today, I will never stop as long as I live fighting for justice through the Philando Castile Relief Foundation.”

Minnesota U.S. Rep. Betty McCollum (DFL-4) said that after a thorough and fair investigation, Ramsey County Attorney John Choi correctly brought this case before a jury. The trial offered transparency to the public and allowed a jury to determine legal responsibility in this case, she said, and the jury has resolved the legal issue of criminality by acquitting Officer Jeronimo Yanez.

“The death of Philando Castile last summer was a tragedy that shook our community and our entire country,” McCollum said. “His death continues to be painful and traumatic for his family, loved ones, and the many people touched by his life.”

Many will be disappointed, heartbroken and angry over the verdict, she said. What can be agreed on is to work together to build a stronger, more trusting relationship between communities and law enforcement, she said.

“And we must truly confront racism and racial injustice in every facet of our society,” she said. “As we have these important conversations, I am hopeful that the entire Twin Cities community will be respectful of one another.”

U.S. Rep. Keith Ellison (DFL-5) said less than a year ago, thousands of people rallied to support the Castile family in their time of hurt and crisis. Many people who knew Castile – his family, friends, students and other loved ones – are forever marked by his death.

“Today’s verdict re-opens old wounds, on top of the scars from past injustices that make so many Black Americans feel that their lives don’t matter,” Ellison said.

“Today, my heart is with the family of Philando Castile. Our community must keep fighting in honor of Philando to make sure a tragedy like this never happens again,” he said. “The movement for justice will continue to march ahead.”

Teresa Nelson, interim executive director of the ACLU of Minnesota, said the jury’s decision does not negate the fact that Philando Castile’s tragic death is part of a disturbing national pattern of officers using excessive force against people of color, often during routine encounters. Castile was one of 1,092 individuals killed by the police in 2016.

“Yet in most cases, the officers and police departments are not held accountable,” Nelson said. “While many officers carry out their jobs with respect for the communities they serve, we must confront the profound disconnect and disrespect that many communities of color experience with their local law enforcement.” 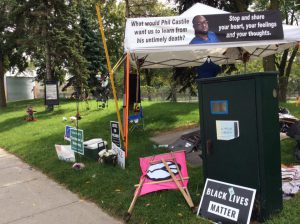 A memorial to Philando Castile still standing in September 2016, two months after the African American man was shot and killed by Jeronimo Yanez, a St. Anthony police officer. while pulled over for a traffic stop in Falcon Heights on July 6, 2016. (Tom LaVenture / Asian American Press)

Two Supreme Court decisions from the 1980’s allow officers to use deadly force when a reasonable officer on the scene could reasonably fear for their safety, she said. These two decisions create an atmosphere where police violence is sanctioned based on what we think a hypothetical officer could have felt, even if, in reality, the officer was acting recklessly, had ill motives or was acting based on implicit bias, she said.

“Taking another person’s life is the most extreme action a police officer can take, and consequently new standards are needed to better ensure that police killings happen rarely,” she said.

The Minnesota chapter of the Council on American-Islamic Relations (CAIR-MN) expressed disappointment with the verdict and said it sends a message to minority communities.

“We hope this sad day may serve as a catalyst for change in our society,” said CAIR-MN Executive Director Jaylani Hussein. We must all redouble our efforts to achieve reform of the system that results in such tragedies.”

Ms. Reynolds showed incredible bravery and composure during the incident, recording the aftermath of the shooting for the world to see, shining a light on the egregious injustice and in recounting the events in court, Hussein said. Valerie Castile has likewise acted as a pillar of strength throughout the trial, and offered messages of hope and calm to the entire community.

“CAIR-MN understands that the system that allows an African-American man to be shot to death in less than two minutes by a police officer is the same system of racial injustice that profiles and threatens the safety of Muslims in our communities,” Hussein said. “We stand with the NAACP, #BlackLivesMatter and other groups fighting racial injustice because we know that standing alongside one another is the only way that we will win the fight against hatred, bigotry and oppression.”

Lawmakers in the People of Color and Indigenous Caucus in the Minnesota House and Senate responded with a statement saying the journey to healing for Castile’s family and community does not end with the verdict. The work will continue pushing to break down walls of fear and misunderstanding, to reform the legal system in the fair pursuit of justice for all and to create a safe community for everyone in the state.

St. Paul Mayor Chris Coleman said Castile was a son of Saint Paul, a graduate of Central High School, and a dedicated employee at J.J. Hill Montessori, where he was loved by his students and co-workers.

Recognizing a need for support, Coleman said community centers, schools and local gathering spaces are open for residents to come together for dialogue and understanding. The Wellstone Center at 179 Robie Street East will have a forum from 6 to 8 p.m. Monday, June 19. Additional community meetings may be scheduled and announced next week.

“As people across our city, state and country react to the jury’s verdict, I urge each of us to move forward in a way that is peaceful and respectful of everyone – residents, demonstrators and police officers alike,” Coleman said.