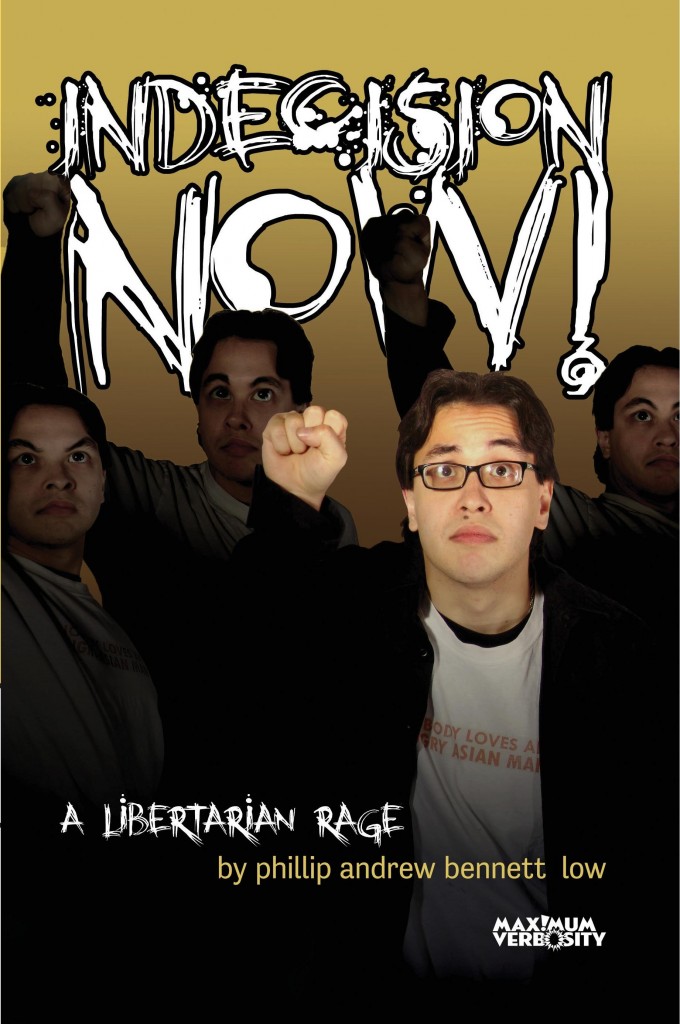 The event will begin with socializin’ and drinkin’ at 6:30 p.m., followed by readin’ and listenin’ at 7:30 p.m., questionin’ and answerin’ at 8:15 p.m., and signin’ and celebratin’ at 8:30 p.m. There will also be a book signing. The event is free to the public, with books and CDs offered at a discounted rates.

Low, of Minneapolis, is a local libertarian activist and internationally touring storyteller. “Indecision Now! A Libertarian Rage” is described as an irreverent collection of stories, jokes, sketches, rants, poems, and essays. Bennet Low cautions that the book contains copious profanity, graphic descriptions of violent and sexual acts, mature language, immature humor, “and other reckless exploitation of the First Amendment.”

“I speak at length in the book both about being an Asian-American, and having grown up in an immigrant family,” Low says. “Indecision Now! A Libertarian Rage” isn’t a battle cry that’s going to rouse anybody’s blood, but I sometimes wonder if it isn’t the sanest one.”

As part of the “Libertarian Rage” series, Low has over the past decade written an ensemble sketch comedy, a one-man show, a blog, and a comedy CD, all of which have been drawn upon for this book.

Natasha Lewin of the Tolucan Times in Los Angeles says of some material in the book: “…a healthy blend of outrage and amusement. Just like the hulk on a bad day, [low] is an angry man, and makes a damn good point showing why we should be too. American political system – SMASH!”

Low is also a Chinese-American playwright and poet, theatre critic and mime. His performances have won acclaim from Minneapolis to Chicago, and Washington, D.C. to Las Angeles — even as far as Melbourne, Australia. He is the co-founder of the Rockstar Storytellers and was founder and producer of the touring theatre troupe Maximum Verbosity.

As one of the original masters of doublespeak and weasel-words, Low teamed up with some of the finest comic talent in the Twin Cities to take on the myriad ways language is used to retort, contort, and distort in this irreverent collection of sketches. Featuring zombies, baby-stabbing, and more dick jokes than you can shake an alarmingly limp stick at, it’s comedy for everyone who’s ever gotten tired of being told what to say and how to say it.