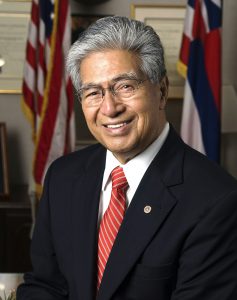 LOS ANGELES — Asian Americans Advancing Justice mourns the death of U.S. Sen. Daniel Akaka, who served in the House and Senate for three and a half decades until retiring in 2012. After being hospitalized for months, he passed away early April 6 in Honolulu. He was 93.

“Senator Akaka was a true inspiration to all of us. He was a powerful advocate for Native Hawaiians, Asian Americans, and Pacific Islanders and served the people of Hawaii with grace and compassion. A strong supporter of veterans, he was also part of the leadership that secured benefits for Filipino World War II veterans. Senator Akaka was a vocal advocate for the investigation into the U.S. treatment of Japanese Latin Americans during World War II. The detention of Hawaiian Japanese Americans and the incarceration of Japanese Americans affected him deeply.  Before he served in Congress, he was in the U.S. Army and was a public school teacher.

Senator Akaka was a true champion and lifelong public servant for our communities, and we will always remember his aloha spirit.”

Hirono Statement on the Passing of Senator Daniel K. Akaka

“Senator Daniel Kahikina Akaka embodied the Aloha Spirit. He dedicated his life to serving the people of Hawaii as an educator, and in the U.S. Army, state government, the U.S. House, and the U.S. Senate. In Congress, Senator Akaka’s care, empathy, and collegiality served as an example for us all. It’s an honor to sit at his desk in the Senate chamber, and we continue his work to improve the lives of veterans and the Native Hawaiian community. My thoughts are with Millie and the Akaka ohana in this difficult time. As he so often said, mahalo nui loa, my friend.”

“My heart is heavy today as we remember my dear friend and mentor, Senator Daniel K. Akaka. With a servant’s heart full of aloha, Senator Akaka dedicated his life to serving the people and our nation, in the U.S. Army, as a public school teacher, in the U.S. House of Representatives, and in the U.S. Senate. I am grateful to have worked with and known Senator Akaka over the years, and to have witnessed firsthand how he truly embodied the aloha spirit—treating all with kindness, respect, and love. His legacy of service and aloha will continue to inspire each of us to live aloha every day—serving others, protecting our planet, and fighting for justice, equality, and peace. My heart is with Aunty Millie and the entire Akaka ʻohana. A hui hou and aloha, my friend.”

WASHINGTON, D.C. – Today, Congressional Asian Pacific American Caucus (CAPAC) Chair Rep. Judy Chu (CA-27) released the following statement on the passing of U.S. Senator Daniel K. Akaka.  Senator Akaka was the first Native Hawaiian ever elected to the U.S. Senate and retired in 2012 after serving a total of 36 years in the U.S. Congress. He passed away in Hawaii earlier this morning at the age of 93.

“I am deeply saddened by the passing of my former colleague, Senator Daniel K. Akaka. As the first Native Hawaiian elected to the U.S. Senate and a founding member of the Congressional Asian Pacific American Caucus, he was a tremendous leader for both the people of Hawaii and the broader Asian American, Native Hawaiian and Pacific Islander community.

“Throughout his 36 years in Congress, he fought tirelessly to secure funding and parity for the Native Hawaiian people and successfully passed an apology resolution to acknowledge the U.S. government’s role in the illegal overthrow of the Kingdom of Hawaii. As a World War II veteran, he also cared deeply about our nation’s military service members and veterans.  During his tenure as chairman of the Senate Veterans Affairs Committee, he led notable efforts to secure benefits for Filipino veterans who served alongside American forces during World War II as well as Vietnam War veterans exposed to Agent Orange.

“His legacy of aloha will be remembered not only in the loving family he leaves behind, but also in his lifelong service to his beloved home state of Hawaii and the American people. My thoughts are with his wife, Millie, his family, and the people of Hawaii during this difficult time.” 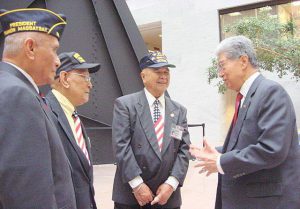 Washington, D.C. “We are deeply saddened that an ardent advocate and courageous champion of Filipino World War II veterans has died,” says Maj. Gen. Antonio Taguba (Ret), chairman of the Filipino Veterans Recognition and Education Project (FilVetREP). “The Filipino American community is immensely grateful to Sen. Daniel Akaka for all his dedicated efforts as a U.S. Senator to restore the honor and dignity of our veterans, who were stripped of their rights and benefits by the 1946 Rescission Act.”

Along with the late Sen. Daniel K. Inouye, both Senators from Hawaii led the way in the U.S. Congress to fight for legislation that would restore full benefits promised by the U.S. government when Filipino soldiers were recruited in 1941.

Sen. Akaka always maintained that “it’s a moral obligation of this nation to provide for those Filipino veterans who fought under the U.S. flag during World War II.”

In 2007, as chairman of the Senate Veterans Affairs Committee, Sen. Akaka spearheaded the fight to pass the Veterans Benefits Enhancement Act, which would have provided Filipino veterans living outside the U.S. a special pension of $300 a month. Although it passed in the Senate, the bill did not succeed in the House.

That same year, Sen. Akaka introduced legislation to reunite Filipino WWII veterans with their families. Recognizing that these aging veterans were in their 90s, but have to wait as long as 20 years under current policy to reunite with their children, this measure sought to help thousands of veterans in their twilight years. Although the measure was never enacted into law, his bill went on to be one of the few bipartisan pieces of immigration legislation.  President Obama, recognizing the bipartisan support for these veterans, later issued an Executive Order allowing eligible Filipino WWII veterans to be reunited with their families through a parole process.

In 2009, President Barack Obama signed into law, the American Recovery and Reinvestment Act (Public Law 111-5) which, among other things, established a one-time benefit payment for eligible Filipino Veterans of World War II.  The Filipino Veterans Equity Compensation (FVEC) Fund was created for this purpose and included $198 million for Filipino World War II veterans.   Sen. Inouye, who led this initiative, acknowledged Sen. Akaka’s support along with others in both the House and Senate.

In November 2016, Congress passed the Filipino Veterans of World War II Congressional Gold Medal Act of 2015, which granted our veterans the long-awaited recognition for their service and sacrifice. The measure was signed into law by President Obama on December 14, 2016.  In hailing its passage, Sen. Mazie Hirono (D-HI), lead sponsor of the Senate bill, thanked both Sen. Inouye and Sen. Akaka for their “considerable efforts” in finally achieving a historic measure of justice that had dragged on for so long.

“Sen. Akaka was a true friend of Filipino veterans, who did his best to ensure that America redeem her promise and recognize these heroes for their valor and duty to country,” says Marie Blanco, FilVetREP Vice Chair. “We will keep his family in our thoughts and prayers during their time of grief.”

“Our country and the state of Hawaii lost a great American today. As the first Native Hawaiian to serve in the U.S. Senate, Senator Daniel Akaka was a fierce advocate for the people of Hawaii. From securing federal money to improve social programs for Native Hawaiians to being a leading voice in persuading the United States to formally apologize for its overthrow of the Kingdom of Hawaii, Senator Akaka always put his constituents first. He spent his entire life fighting for justice and opportunity for all Americans, and there is no doubt we will miss his ‘aloha’ spirit. Our prayers are with Senator Akaka’s wife, Mary, his five children, and his entire family at this difficult time.”

Washington, D.C. — KAYA – Filipino Americans for Progress mourns the loss of Senator Daniel Kahikina Akaka from Hawaii. Senator Akaka was a lifelong public servant that served in the U.S. Army, Hawaii state government, the U.S. House, and the U.S. Senate. He was instrumental in advocating for the recognition of Asian Americans in the 442nd Regimental Combat Team and the 100th Division during World War II and for securing a formal apology for the United States’ role in overthrowing the Kingdom of Hawaii.

“KAYA honors the life of Senator Akaka, whose legacy will live on in communities he empowered and fought for,” said Mary Tablante, KAYA chair. “He was a public servant whose impact is immeasurable. Senator Akaka fought for the rights of Filipino and Filipino American World War II Veterans to ensure they received the benefits they deserve. In 2012, ahead of his retirement, KAYA honored Senator Akaka for his dedication to our communities. He served as a role model that future AANHPI leaders aspire to.”

KAYA extends its thoughts and prayers to the Akaka family.