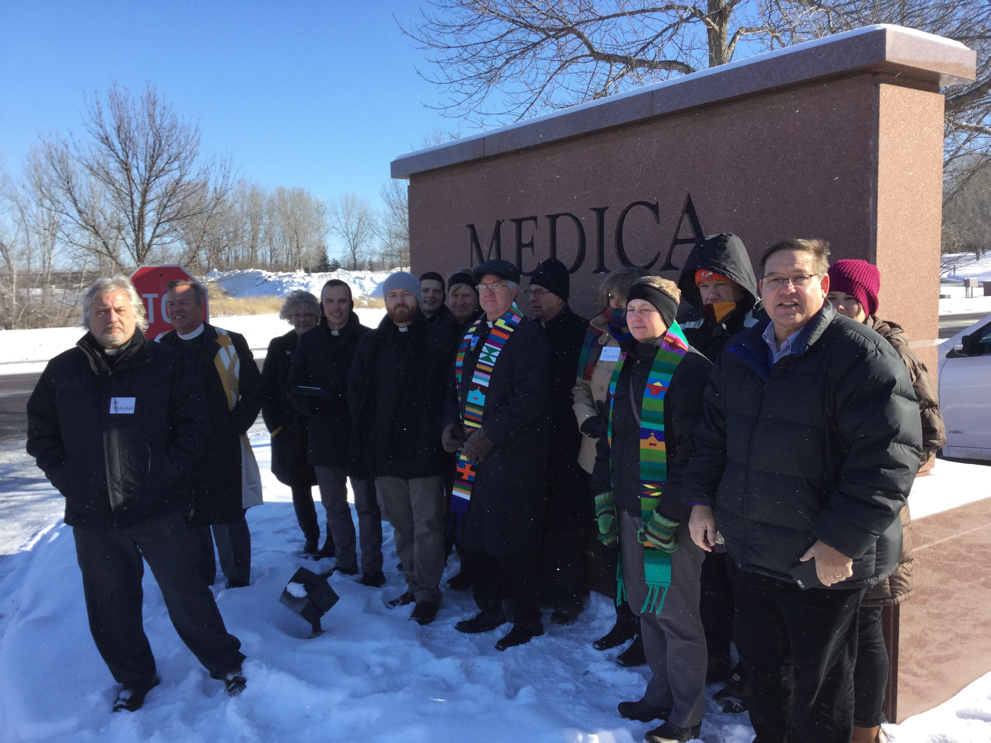 ISAIAH, a faith-based organization focused on racial and economic justice.

HOPKINS, Minn. (Jan. 11, 2017) — While Minnesota House and Senate Republicans are moving forward with a proposed massive corporate bailout for health insurance companies who have created a crisis for Minnesota families with bloated premiums, Minnesota Clergy held an action at Medica, one of the worst insurance actors.

Faith leaders expressed outrage over Medica’s attempts to force Minnesotans to pay for the costs of their morally questionable business decisions. Clergy with ISAIAH, a faith-based organization focused on racial and economic justice, are calling for a public option so that private insurance companies are required to compete with a system genuinely focused on people’s well-being.

“Running a health care system on competition for profits is unholy and inefficient,” said Rev. Eric Hoffer of Prince of Peace Lutheran Church, St. Louis Park. “But if they must compete let them compete with the public and a public option.”

Rev. Javen Swanson of Gloria Dei Lutheran Church in St. Paul spoke of the personal hardship his own family is experiencing in the face of health care being about profits instead of the world’s most precious asset, people. His mother, a Medica patient, was notified of a 65% increase in her premiums – making her monthly payments $825, just for health insurance. “My mom and thousands of seniors just like her need a health care system that wants their health not just their money.”

Rev. Laurie Eaton of Our Saviors Lutheran Church in Minneapolis along with other faith leaders hand delivered a letter of disapproval and discontent to the representatives at Medica. She was also able to verbally express the concerns of her church, clergy and ISAIAH faith leaders with the Medica representatives and confirmed a future meeting with them.

“This is a step forward, but this dispute is far from over,” said Eaton.  “Working to take greed out of health care has unfortunately become a necessary part of pastoral care in our generation.”

In 2015, Medica submitted a low bid to the state for the Prepaid Medical Assistance Program (PMAP). One of the results of this low bid was that one of Medica’s major competitors, UCare, was forced out of this program. Because of that, an estimated 400,000 enrollees had to switch their health insurance in 2015. Medica is estimated to have gained approximately 130,000 of those enrollees.

Then, in late 2016 Medica demanded an increase in payment from the State of Minnesota. When the State denied this increase, Medica abruptly notified the State that it would withdraw from this market.

Over 312,000 Minnesotans – all of whom are low-income, many of whom are poor, children and pregnant women, as well as people struggling with mental illness – will be forced to change their health insurance plan as a result of Medica’s withdrawal. Many of these unfortunate families had just changed from Ucare in the previous year. Many will lose access to the doctors and hospitals of their choice. Most will face struggles navigating complex systems to find new healthcare coverage because of Medica’s actions.

The Minnesota Legislature Is Seeking to Bail Out Medica and the Other Insurance Companies Who Caused This Crisis.

The actions of Medica have substantially contributed to the instability in the entire healthcare system, and now Minnesota Senate and House Republicans are proposing a massive bailout for Medica and the other insurance companies who have plunged many Minnesota families into financial hardship.

Here’s a summary of The Proposed Legislation