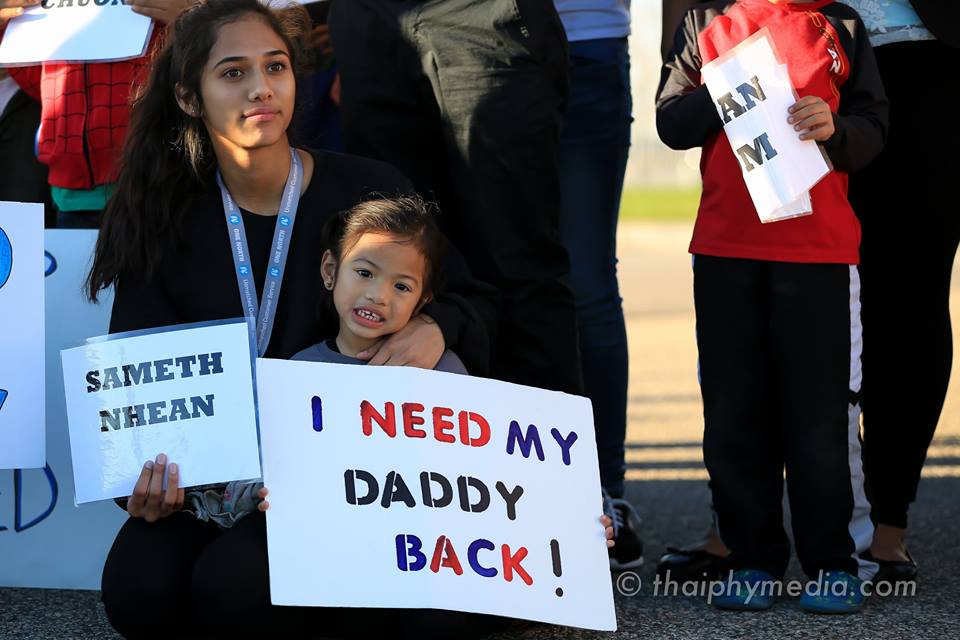 MINNEAPOLIS (Nov. 4, 2016) — More than 100 people converged at the Immigration and Customs Enforcement (ICE) Field Office on Thursday at Fort Snelling to protest the pending deportations of loved ones to Cambodia.

Eight Cambodian refugee men from Minnesota have been targeted for deportation because of old criminal convictions. All served their sentences and had moved on with their lives when they were apprehended by ICE and processed for deportation.

“My husband hasn’t even been to Cambodia,” said Jenny Srey, wife of Ched Nin, 36, one of the men targeted. “He was born in a refugee camp in Thailand and grew up in Minnesota. He has a Minnesotan accent. He belongs here with us.”

Children, family members, and supporters are asking ICE to release the men immediately. “They might as well be sending these men to their deaths,” said Sokha Kul. “They have no ties to Cambodia. Their entire lives are here.” Sokha added, “To our kids, these ICE agents are monsters. My baby is having nightmares about his daddy being deported. They need to know the kind of terror they are inflicting on our families.”

The eight men were detained in August as part of a nationwide sweep of Cambodian refugees with old criminal records that make them deportable.

Katrina Dizon Mariategue of the Southeast Asia Resource Action Center (SEARAC) in Washington, D.C., said that immigration laws passed during a “tough on crime” mood in the mid-1990s vastly expanded the range of convictions, from violent crimes to shoplifting and minor drug-related offenses, that can result in mandatory deportation.

“Immigration judges have spoken out that these laws unfairly tie their hands,” Dizon Mariategue said. “They see refugee fathers who have moved on with their lives – people like Ched Nin who have kids with health issues, and who volunteer their time in the community. But these laws make it difficult to stop their deportations.”

The family of the eight men continue to fight against the deportations, which are rumored to be set for late November and December.

“Without Ched, we lose our health insurance, our home, our family’s rock,” Srey said. “We will do everything we possibly can to keep him home with us.”