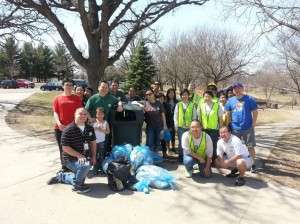 The successful campaign was started as a result of late season snow that forced cancelation of the annual citywide parks clean-up event. The online campaign encouraged residents to clean up parks and post pictures of their efforts to social media sites for a chance to win summer pool passes.

The campaign received dozens of entries, and following a random drawing, the Foung Hawj Volunteer Team was selected as #CleanupStPaul’s first winner.

Lissee Thao, a member of the Foung Hawj Volunteer Team, participated in the cleanup and said it was the first time she had done anything like it.

“It was a really good feeling, knowing you’re doing good and making the parks clean and beautiful,” Thao said. “I encourage everyone to go out and help because it doesn’t take much of your time and really does make a difference.”

For the past 27 years, the City of Saint Paul has hosted an annual volunteer-based spring cleaning of the parks system. Each year, thousands of residents volunteer their time and spend a Saturday morning in April picking up trash and debris from their favorite park or neighborhood. Tons of garbage and debris have been removed from parks over the years, but this year, due to snow and inclement weather, the annual event had to be canceled.

The Parks and Recreation Department continued to receive interest from volunteers who wanted to help, so to help coordinate all of the interest and give residents an opportunity to participate, the online campaign #CleanupStPaul was started. Supplies and preferred park locations were provided as part of the campaign, and summer swim passes were offered if volunteers posted pictures of themselves participating as part of a contest.

“What a tremendous show of support and concern for Saint Paul’s parks!” said Mike Hahm, Saint Paul’s Parks and Recreation Director, “I’m sure the swimming passes to one of our award winning pools helped, but residents are really passionate about their parks and its shows. I know the 12 plus million visitors that use Saint Paul’s park system each year will appreciate as much as I do all the hard work these volunteers completed.”

Residents are encouraged to continue park cleanup efforts and to post their cleanup photos to Twitter or Facebook using the hashtag #CleanupStPaul.  For additional information on the #CleanupStPaul program visit the Saint Paul Parks and Recreation Department on Facebook at https://www.facebook.com/stpaulparks.

Saint Paul Parks and Recreation is a nationally-accredited and gold medal award-winning organization that manages more than 170 parks and open spaces, AZA-accredited Como Park Zoo and Conservatory, 25 city-operated recreation centers, four municipal golf courses, more than 100 miles of trails, an indoor and two outdoor aquatic facilities, a public beach, a variety of premium sports facilities and Great River Passage – which is the new identity for all proposed public development along Saint Paul’s more than 17 miles of Mississippi riverfront. For more information about Saint Paul Parks and Recreation, visit www.stpaul.gov/parks.