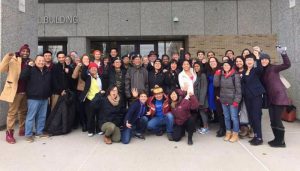 Farmington, Minn. (March 8, 2017) — Following months of sustained community advocacy, long-time Minnesota resident Ched Nin was released to his wife and their five children in late February after being held by Immigration and Customs Enforcement (ICE) for over six months.

Ched was detained by ICE in August and processed for deportation to Cambodia because of a 2010 conviction for which he had already completed his sentence. While detained, Ched’s wife, Jenny Srey, and seven other Minnesota families whose loved ones also faced imminent deportation mobilized activists and Southeast Asian American community members around a campaign to “Release the Minnesota 8.“
Quyen Dinh, executive director of the Southeast Asia Resource Action Center (SEARAC), said, “Jenny and the Release Minnesota 8 campaign demonstrate the power of grassroots organizing and embody the fierce resilience of our refugee communities. Ched was finally released through legal channels, but it took months of community mobilization by Cambodian Americans and advocates to come this far.”
Supported by national organizations Mijente, the National Immigration Project of the National Lawyers Guild, and the Southeast Asia Resource Action Center (SEARAC), the #ReleaseMN8 campaign was covered widely by the media and garnered the support of congressional leaders Keith Ellison (MN-5), Mike Honda (CA-17), and Judy Chu (CA-27) among many others.
At an immigration hearing on Feb. 24, Ched was represented by University of Minnesota law professor Linus Chan and his students John Hoag and Shane Fitzmaurice through the James Bringer Center for New Americans. He was released after an immigration judge granted him a 212(h) waiver and regained his green card on the grounds that his family would suffer extreme hardship in the event of his deportation.
Julie Mao, an attorney with the National Immigration Project of the National Lawyers Guild, explained, “We are grateful that the Court recognized the extreme hardship that Ched’s deportation would have on his family and community by granting him this rare form of relief. We celebrate Ched’s release and the organizing that brought us to this victory, while recognizing the thousands of families impacted by deportations that are unable to access such relief due to our unjust immigration laws. We will continue to support grassroots community in exposing and organizing against our harsh incarceration and deportation systems.”
“The courageous organizing in the Release Minnesota 8 campaign shows that even if our people have convictions, we will fight and we can win. In Ched’s case, I believe that the broad movement support is what made the difference,” said Jacinta Gonzalez, Field Director of Mijente. “This is a win for organized communities that lays out a road map for how to continue fighting against criminalization and deportations under a much more aggressive administration.”
Ched was 6 years old when he entered the U.S. as a refugee with his family in 1986. Like many young Cambodian Americans, he faced unique struggles to fit into a country that did not wholeheartedly accept him. He made a few mistakes when he was younger, but Ched has turned his life around to become a devoted husband, a loving father, a hard worker, and a beloved community member.
While the community celebrates this good news for Ched and his family, they continue to fight for many others affected by unjust immigration policies. Last month, the Cambodian government issued 34 travel documents to accept community members with final orders of removal. Five of the “Minnesota 8” families have been informed that their loved ones are among those who will be deported in the following weeks.
“I am happy to be back home with my family and am moved by the love and support of the community,” said Ched. “My family and I went through a lot these past six months and my heart breaks for those who continue to be separated from their families. I know there is still more work to be done, and I want to help keep families together.”
Dinh added, “While we celebrate Ched’s release, it hurts to see so many other refugee families suffering. We’ll continue to fight on a systemic level for policies that recognize rehabilitation, second chances, and the sanctity of family.”
Click here for updates and to support the ongoing efforts of #ReleaseMN8.
Share