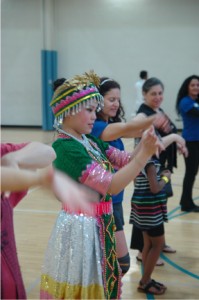 MINNEAPOLIS (April 2, 2015) — Worldwide, cultural diversity has been evolving within and across communities, and continuously changing over time and has been shaped by human mobility and aspiration.

Biculturalism is the best practice within the Cultural Diversity arena – these are the people who master the rules and norms of their new culture without abandoning their own language, values and social support.  It refers to a sense of belonging to a broader cultural communities and common humanity, promoting the ‘Cultural Resilience’ that integrates diverse cultures together.

Cultures itself has often shared such INTEGRATION concept, for example, in the American Indian culture their youth are encouraged to be like “Little Turtle” who needed to know how to move both in water and on land (in two cultures).   In the Chinese philosophy, it suggests the balance between Yin (“shady side”) and Yang (“sunny sides”) (as two different perspectives).   It is also a way of living, understanding, acting and relating oneself to others and the environment in space and in time, based on universal values, through respect for diversity and pluralism.  In this context, each individual’s life has implications in day-to-day decisions that connect to their root culture and other diverse cultures around them, and vice versa.

Until recently, Biculturalism was considered mainly in the perspective of partnership for ethnic minorities in a mainstream cultural environment, with different levels of biculturalism: the assimilation, acculturation, alternation, multicultural and fusion models.  However, new concepts of Biculturalism and Bicultural identity are emerging that are relevant to globalization – ‘a compression of time and space’, Biculturalism has been considered in the absence of peoples’ geographical displacement.  Many argue that most people around the world will develop a different form of bicultural identity, combining their local identity with an identity linked to the global culture. This phenomenon is particularly relevant in Adolescents, as contemporary urban teenagers worldwide tend to follow similar consumption patterns and integrate with their ancestral cultures.

By expanding the definition of “Biculturalism”, the phrase – BI can be interpreted beyond its noun meaning of 2 cultures, but multi-cultures, and focusing on its verb meaning – Combining – the INTEGRATION effort, and we have developed a concept of Bicultural Healthy Living which is evolved from Biculturalism, to support living healthily within cultures people adapted to.

Such Bicultural Healthy Living is for individual to possess:

An Attitude supported by an understanding of multiple levels of cultural identity, and the potential for a ‘collective identity,’ which transcends individual cultural, religious, ethnic or other differences;

An Understanding to support people of color from an asset-based approach by identifying the cultural implications and skills from their diverse life experiences and translate them into success, instead of a deficit approach to start what people don’t have;

A Deep Knowledge of bicultural healthy living through universal values such as justice, equality, dignity and respect;

A group of Cognitive Skills to think critically, systemically and creatively, including adopting a multi-perspective approach that recognizes the different cultures, perspectives and angles of issues;

A group of Non-Cognitive Skills including social skills such as empathy, resiliency and conflict resolution, communication skills and aptitudes for networking and interacting with people of different backgrounds, origins, cultures and perspectives; and

A group of Behavioral Capacities to act collaboratively and responsibly to find cross-cultural solutions for local/regional/national/global challenges, and to strive for the collective good. 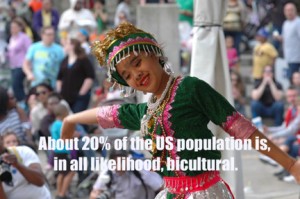 We see the B.A.L.L. Initiative can support participatory and transformative best practices that:

Understand there is no dominate culture, all cultures are equally important, and should be proud of and practice with;

Recognize cultural norms, agency policies and city greenway frameworks that impact on the formation of a Complete Street in North Minneapolis.

Following are few Best Practices examples for the B.A.L.L. Initiative:

• Increasing the health care access with bicultural approaches, such as: green prescriptions, herb medicines, and other alternative healings

Besides placing emphasis on the need to preserve cultural traditions, B.A.L.L. Initiative would emphasize the evolving nature of cultural diversity, and work through integrating diverse cultures holistically.   Please join the B.A.L.L., and pass the B.A.L.L.  To sign up for eNewsletter and Weblog (http://biculturalhealth.apacommnet.org), please contact: [email protected], 612-376-7715.