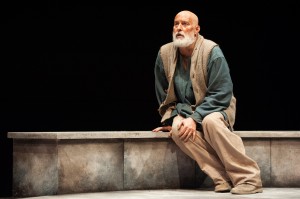 Stephen Yoakam (The Poet) in the Guthrie Theater’s production of An Iliad, adapted from Homer by Lisa Peterson and Denis O’Hare, translation by Robert Fagles. Directed by Benjamin McGovern, set design by Michael Hoover, costume design by Christine A. Richardson and lighting design by Tom Mays. October 1-20, 2013 in the Dowling Studio at the Guthrie Theater, Minneapolis. (Photo by Aaron Fenster)

MINNEAPOLIS (Oct. 11, 2013) — Actor Stephan Yoakam, poetically orated his ideologies regarding being brave, having courage and fighting political forces of evil. Through a lens of Greek Mythology, Yoakam brought to light the human struggle to maintain a kind heart or autonomy, despite dwelling within toxic political systems.

Given the United State’s current government shutdown, political posturing and absolute righteousness has made me wonder if politicians have advanced at all over the centuries? Yoakam spouted philosophical perspectives, which implied that no one escapes the evils of politics, systems of government and the psychological impact of both. Government removed from every day people, results in innocent citizens held hostage to the evils politicians overwhelming desire to obtain, maintain and increase power.

His ability to stay on message for ninety minutes was impressive. While the play began with creationism stories, he finished with all of the ways our global society has fallen sick due to the illusion of power. He recited the names of countless wars throughout history, which held the audience in awe. The comparative analysis of individuals versus systems was powerful. He underscored ways in which individuals have become a part of systems that inevitably recues themselves of having a conscious towards human kind.

Questions came to mind about, “Why does power affect some humans differently than others?” “With regard to war, why aren’t we learning that it rarely solves issues without an enormous casualty price tag.” “At what point will we become emotionally, psychologically, spiritually and politically advanced enough to see that human’s needs to accumulate and abuse power results in catastrophic consequences for everyone.  Maybe, one of the messages was . . . having courage allows us to be brave, so that together we can claim back our humanity?

Ambiguous at best, this play made me curious enough to examine the role that politics plays in my life and to what extent humanity is too often overlooked.