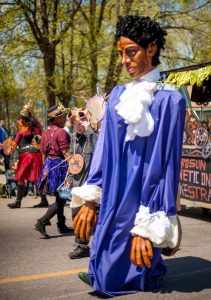 43rd MayDay Parade, Ceremony & Festival
Presented by In the Heart of the Beast Puppet and Mask Theatre
WHEN: 12.00pm – Sunset, Sunday, May 7, 2017
LOCATION: Parade starts corner of 25th St. E. and Bloomington Ave. S, Minneapolis at noon, and travels south on Bloomington to 34th St. E., and into Powderhorn Park – where the Tree of Life
Ceremony and Festival take place following the Parade.
FREE Event
More event information: http://hobt.org/mayday/

MINNEAPOLIS (March 30th, 2017) — In the Heart of the Beast Puppet and Mask Theatre’s annual MayDay Parade, Tree of Life Ceremony, and Festival is a much loved ritual of creativity and participation. For 43 years MayDay has been a vibrant example of art as community building and place making in the Twin Cities area. For many in Minnesota, the MayDay Festival is a time to honor the local community and contemporary issues, concerns, and visions for a better world with hand-built puppets and masks (many over 10 feet tall), music, and performance.
The MayDay process officially begins with an open Community Meeting in early February. From this shared conversation, the theme of the current year emerges. The theatre is converted to a giant studio space and throughout April EVERYONE is invited in to attend these open workshops to participate in the building of puppets and masks that illuminate the yearly theme. As the Parade and Tree-of-Life Ceremony unfolds on street and field on the first Sunday of May, more than 50,000 people from near and far fill the streets as celebrants. This event is an important ritual of renewal for many neighbors of the Phillips and Powderhorn Communities of South Minneapolis.
The MayDay Parade has long been a testament to the power of seemingly small things making a significant impact. Community participants transform recycled cardboard pieces, clay, house paint, and fabric scraps into towering structures, gorgeous masks, two and four person backpack puppets, bike floats and more. More than 4,000 people of all ages participate in the Parade.
The MayDay Tree of Life Ceremony in Powderhorn Park involves 300 performers of all ages enacting a pageant about the theme chosen for this year. It culminates with a resplendent Sun Flotilla arriving   across the lake to the shore where the giant Tree of Life is then raised.
COMMUNITY PARTICIPATION
Public workshops for this year’s parade began on Saturday, April 8th, 2017 and will run through May 4th, 2017.  Anyone and everyone is welcome to attend these parade-building days, and construct their own wonders, free of charge. (Donations gratefully accepted!) The end result of the public workshops is always a testament to the diversity not only of our community, but also the creative spirit.
Workshops at HOBT’s Avalon Theatre (1500 East Lake Street, Minneapolis) will be:
– Every Tuesday from 7-9pm
– Every Thursday from 7-9pm
– Every Saturday from 9-11am and 1-3pm
MAY 7th, 2017 MAYDAY EVENT SCHEDULE:
12.00 pm: PARADE BEGINS at the corner of 25th St. E. and Bloomington Ave. S., and travels south on Bloomington to 34th St. E., where the parade turns west towards Powderhorn Park.
3.00 pm (after the parade arrives): The MayDay Tree of Life Ceremony begins in Powderhorn Park
All day: The MayDay Festival in Powderhorn Park follows the MayDay Parade and features music, dancing, poetry, foods, canoe rides, and more!
A GREENER, HEALTHIER FESTIVAL
Last year 2,400 pounds of compost and recycling was collected at MayDay. Diverting 75% of all waste from a landfill or incinerator was a huge success. This year we are hoping to break that record with a goal of diverting 80% of the 2017 MayDay Festival waste from landfills.
In an effort to reduce waste the MayDay ‘Green Team’ is collaborating with Kabomelette food truck owners, Greg and Chelsea Miller, and Restaurant Supplier Joe Palen to serve 500 MayDay customers on washable plates. Washing dishes consumes much less energy and produces less waste than recycling or even composting. We are very excited about this experimental approach to reducing waste!
Tap Minneapolis will be providing free drinking water to festival goers supporting HOBT’s efforts to end the privatization of water and reduce waste.
Southside Community Health Services is partnering with In the Heart of the Beast to create a “Healthy Hearts” Health Village as part of the larger MayDay Festival. More information on this to come.
This year In the Heart of the Beast is partnering with Metro Transit to offer free rides to the MayDay parade and festival.
Founded in 1973, In the Heart of the Beast Puppet and Mask Theatre (HOBT) is a singular theater company recognized internationally for both its artistry and service to the community. Through performance, ceremony, teaching, and community building, HOBT explores and celebrates the human experience and the wonders of the world’s natural and cultural richness.
Through a collaborative artistic process, HOBT’s work draws together diverse communities to address local and global issues and celebrate our shared humanity. Work is devised “from scratch”, combining original design, writing, music, movement, and varying types of puppetry to create stunning visual theater to serve the specific project and constituents.
Share