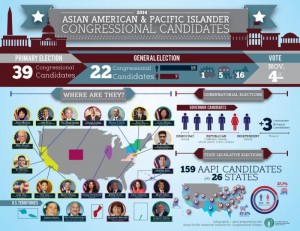 Despite these optimistic numbers, the community still faces many obstacles to equal participation and representation. According to new research from Asian Americans Advancing Justice, APIAVote, and AAPI Data, 66 percent of AAPI’s have not been reached out to by Democrats and 74 percent have had no contact from Republicans. The scarce interactions between AAPI’s and political parties demonstrates the challenges AAPI communities face to full participation in the political process.

It is vital that levels of AAPI political participation and representation match the growth of the community. Despite breakthroughs for AAPI’s in federal elected offices, only 14 members out of the 485 members of the U.S. House of Representatives are AAPI. APAICS President/CEO Floyd Mori says, “The record breaking AAPI candidacies in the 2014 election is a strong indication that the AAPI community is ready to step up to the plate instead of staying on the sidelines. This trend empowers AAPI’s to express their voice at all levels of civil engagement and to make a difference where it matters most to our community. The vital step for all of us is to register as a voter and to vote on November 4.”

APAICS is a national nonpartisan, nonprofit organization dedicated to promoting Asian American & Pacific Islander participation and representation at all levels of the political process, from community service to elected office.