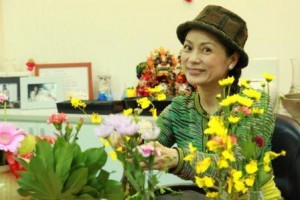 Relationship Master Hellen Chen will arrive in Los Angeles to share the secret of a happy marriage.

LOS ANGELES — Bestselling author and matchmaker extraordinaire Hellen Chen has a mission in hand. After helping at least 100 unwilling singles to nod their heads and become married, and delivering love seminars in Singapore and Taiwan, she is bringing her brand of ‘happily ever after’ to Los Angeles this Saturday on March 8.

Chen’s famous advice of “marriage first, date later” is a shocker for most who are used to the concept of dating carefully first before selecting the right partner for marriage.

This unconventional matchmaker has however used this philosophy to successfully match couples together who then stay together. She encouraged singles to not spend time and money and energy to go around dating but to look for someone who seriously want to enter marriage.

When asked about why dating a lot to find the right partner does not work, Chen explained in a recent Fox TV interview, “When people date a lot before they get married, their hearts get broken once too often and these bad experiences accumulate. These bad experiences even carry into their marriage and the moment they encounter seemingly insurmountable hardships in the relationship, they break-off easily as they think the next gal or guy would be better.”

According to this matchmaker, a marriage is not about what another person could give to self but a chance for self to learn how to give to another.

“I am blessed with a great marriage, having met my Prince Charming 20 years ago.  But that is not the reason why I encourage marriage.” said Chen, whose main profession is actually not a matchmaker but the President of an international management consulting company. “I encourage marriage because that is the initial goal of most people. And a sound marriage can bring so much happiness and even freedom to a person’s life.”

As a boss who liked to see her employees being well-rounded in all areas of life, Chen engaged in matchmaking initially because of simply wanting to help her employees who were having problems in finding the right marriage partners.

“Everyone I met has at one point longed for a great relationship. But after one’s own failures or seeing another failing at their relationships, that desire turned into disbelief and turned into hopelessness,” Chen said.

From a deep passion about marriage, Chen started to help the people around her find their match and stay in marriage afterwards. She wrote 22 books on the subject and her book “The Matchmaker of the Century” became a number one best seller in marriage books at Barnes and Noble.

To help singles and couples to get the right training on how to create a happy marriage and how to find the right match, Chen has released a whole series of love workshops in Asia and in America.

This upcoming event “Hellen Chen’s Love Seminar” on Saturday March 8 at Hilton Hotel in San Gabriel city is the 6th workshop she has conducted in Los Angeles.

Chen’s works in family, marriage and personal developments are featured in over 200 media publications in 20 countries. She has been a frequent guest on independent and network radio and TV shows on FOX, CBS, NBC and ABC.