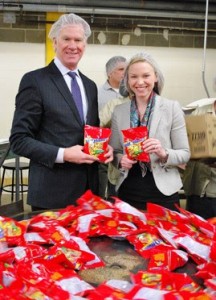 ST. PAUL (March 26, 2014) — Pearson Candy Co., which has been making candy in Minnesota for more than 100 years, is expanding its St. Paul operations in a move that will create at least 40 local jobs.

Pearson’s officials today celebrated the first Bit-O-Honey candy ever made at its iconic factory on West Seventh Street, after moving production from another manufacturing facility in Illinois. The Bit-O-Honey brand, which dates back to 1924, was acquired last year by Pearson’s.

To help Pearson’s offset the cost of moving equipment, expanding its production line and other related expenses, the Minnesota Department of Employment and Economic Development (DEED) awarded the company a $200,000 forgivable loan from its Minnesota Investment Fund. The company won’t have to pay back the loan, provided it creates 40 jobs paying $13 an hour by April 2016.

“Pearson’s is a wonderful Minnesota company whose Nut Goodies, Salted Nut Rolls and other iconic brands have been satisfying the consumer sweet tooth for generations,” said DEED Commissioner Katie Clark Sieben. “We’re happy to help the company expand and to continue a great Minnesota tradition.”

“Companies like Pearson’s continue to add to the vitality of St. Paul through the creation of new jobs and products,” added St. Paul Mayor Chris Coleman. “The company, much like the city, started with a few ambitious minds, and they have thrived, excelled and pushed new boundaries. I’m proud that Pearson’s continues to call St. Paul home and am excited to see the company expand here.”

Pearson’s was launched as a Minneapolis confectionary distribution firm in 1909 by P. Edward Pearson and his brothers Oscar F. and John Albert Pearson. Two other brothers, Waldemar and C. Fritz Pearson, eventually joined the business as well. By 1912, they were producing their own candy, including the iconic Nut Goodie. The company moved to downtown St. Paul in 1950 and to its current West Seventh location in 1959.

The Bit-O-Honey brand, which had been manufactured in Bloomington, Ill., was purchased from Nestlé USA Inc. last May.

About 90 people are now employed at the St. Paul candy factory, which also manufactures brands such as Salted Nut Roll, Nut Goodie, Mint Pattie and Bun Bar. Pearson’s held a job fair late last year to identify candidates for positions ranging from cooks to production assemblers and maintenance mechanics for the Bit-O-Honey line.

DEED is the state’s principal economic development agency, promoting business recruitment, expansion and retention, workforce development, international trade and community development. For more details about the agency and our services, visit us at http://mn.gov/deed/. Follow us on Twitter at twitter.com/mndeed.