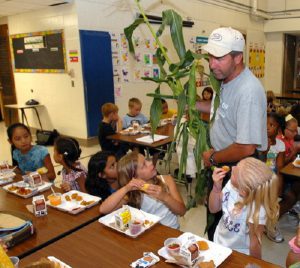 Under the Farm to School program children learn early about good nutrition. (iatp.org)

The legislation would reimburse schools for their farm to school programs and provide technical assistance to districts, farmers, and businesses that want to start or improve a program that’s already in place.

Erin McKee, co-chair of the Farm to School Coalition, says it would also maintain funding for a grant program that allows school districts to purchase equipment.

“A lot of school kitchens aren’t very well equipped to cook from scratch and from whole foods because they’ve converted over to a heat and serve model,” she points out. “So equipment is really a barrier for a lot of schools to be able to work with local products from local farms. ”

The legislation being heard in a House committee this week would also give schools money to buy local meat, dairy and produce. Minnesota is one of only 12 states without such a statewide policy in place.

McKee says the legislation also provides funding to educate Minnesota farmers who want to participate in the Farm to School program, which she says can help them grow their business.

“If those farmers get that support and get connected with the institutional markets of schools and child care centers and things like that, they actually will have also learned a lot of the skills they would need to sell to many other markets like hospitals, or restaurants, or other things like that,” she explains.

McKee says Farm to School is a win for children, for farmers and for the local economy.