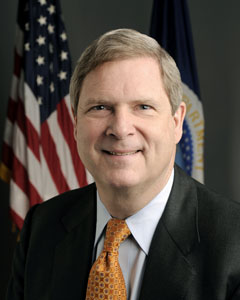 WASHINGTON, D.C. (Nov. 20, 2015) — U.S. Secretary of Agriculture Tom Vilsack arrives in China this weekend. Over the past decade, the United States’ agricultural exports to China have risen sharply, propelling China into its position as the fastest-growing and highest-value export destination for U.S. farm and food products.

In 2011, China surpassed Canada to become the top U.S. market and it has since retained that position. In fiscal year (FY) 2015, U.S. agriculture and related exports to China totaled $25.9 billion, comprising approximately 16 percent of all U.S. agricultural exports.

While the rapid growth in U.S. farm exports to China has plateaued in recent years, many macroeconomic conditions signal the potential for continued long-term growth and trade expansion in China. An increasingly urban population, a growing middle class, and higher disposable incomes have increased Chinese consumers’ ability to diversify their diets and purchase high-value, protein-rich foods.

The value of U.S. agricultural and related exports to China has more than tripled over the last 10 years, reaching a record $29.6 billion in FY 2014 before declining slightly in FY 2015. 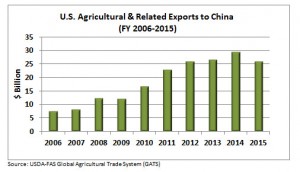 Due to China’s severe cropland shortage and inexpensive labor force, U.S. exports to the country have traditionally been dominated by land-intensive bulk commodities that China then processes for domestic consumption or export. More recently, China’s booming demand for luxury items and ready-to-eat foods has created new opportunities for the United States, particularly for exporters of intermediate products such as oils, fats, flour, meal, and sweeteners, and consumer-oriented products such as processed foods, meats, dairy, eggs, tree nuts, and wine and beer. U.S. exports of bulk, intermediate, and agricultural-related products, such as forest and fish products, have each increased approximately 250 percent since 2006. Exports of consumer-oriented products grew 150 percent over the same period.

A variety of agricultural goods have made significant contributions to U.S. export totals, many gaining first-time market access to China in the last couple of years. For example, U.S. sorghum and distiller’s dried grains used for animal feed have become billion-dollar exports to China despite being almost non-existent prior to 2008. Sales of these lower-cost feed substitutes have helped offset recent declines in U.S. corn exports caused by China’s restrictive trade policies. Similarly, exports of U.S. hides and skins, seafood, and wood products have recently surpassed the $1 billion mark. While these numbers are significant, soybeans continue to dominate U.S. agricultural exports to China, historically accounting for approximately half the total value of U.S. exports. In FY 2015, U.S. soybean exports to China were valued at $12.7 billion, the second-highest level on record. 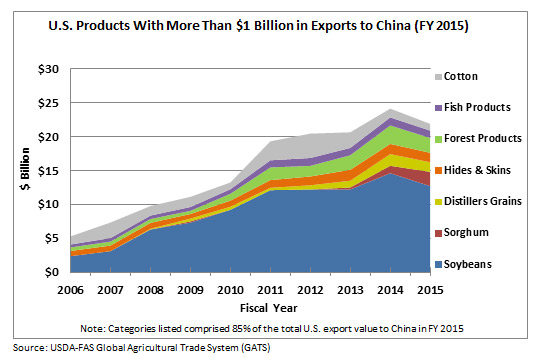 The tremendous expansion of U.S. agricultural trade with China has not come without challenges. Chinese consumers recognize the United States as a supplier of high-quality agricultural and food products that are both trusted and desired. However, U.S. exports are limited by Chinese policies that promote agricultural self-sufficiency and protect domestic industries. China’s lack of regulatory transparency, inconsistent product review and approval processes, and erratic distribution of import quotas all distort trade and create uncertainty for U.S. exporters. This environment has prevented the United States from achieving its full potential in exports to China.

The size of the agricultural trade relationship for both the United States and China, as well as U.S. agricultural exports’ support for China’s food security through trade, provides incentives for both sides to address these issues. Recent engagements have shown that negotiations between the two countries can achieve positive results. For instance, a series of agreements on sanitary and phytosanitary (SPS) measures and technical barriers to trade (TBT) for horticultural goods has greatly benefited U.S. almond, citrus, and apple producers. In FY 2015, U.S. exports of these goods to China were valued at $87 million, $34 million, and $20 million, respectively.

Ample opportunities for expansion continue to exist within China’s food and agricultural markets. Growth in China’s food consumption is forecast to outpace its domestic output by more than two percent per year between 2015 and 2020, resulting in increased demand for imports (IHS Global Insight). In order to address the growing demand for food, China is pursuing a number of economic and regulatory reforms to bolster its domestic agricultural production and efficiency. Additionally, according to Chinese officials, these reforms are designed to be market-oriented and consumer-driven. As China moves forward with this process, U.S. agricultural stakeholders must be fully engaged with the Chinese in order to avoid unwarranted restrictions of U.S. exports and to promote policies that are mutually beneficial to the trade partnership.