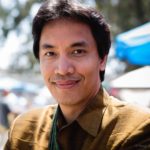 First established in 1978, the Science Fiction Poetry Association brings together poets and readers interested in science fiction poetry, as well as poetry incorporating fantasy horror and other imaginative genres. An international organization, it publishes two journals, Star*Line and Eye to the Telescope, and oversees three major literary awards for poetry: The Rhyslings, the Dwarf Stars, and the Elgin Awards. They also conduct an annual science fiction poetry contest and other special events and gatherings. They also provide resources for emerging and established poets seeking professional publication and networking opportunities.

Born in Vientiane, Laos in 1973, Thao Worra has been a Rhysling-nominated poet and the recipient of the 2014 SFPA Elgin Award for Book of the Year for his collection “DEMONSTRA” from Innsmouth Free Press. He was a guest of honor for the 2015 CONVergence convention and a guest editor for Eye to the Telescope. His books include On the Other Side of the Eye, Touching Detonations, Winter Ink, BARROW and The Tuk Tuk Diaries: My Dinner With Cluster Bombs, and he has been published in over 100 publications. His poetry has appeared in  Australia, Canada, England, Scotland, Germany, France, Singapore, Hong Kong, Korea, Chile, and Pakistan.

“I’m honored to have the trust and support of the SFPA membership,” Thao Worra said. “This is an exciting time for the literary arts, and there is a deep need for us to explore the possibilities of poetry that embraces the imagination. Working so closely with refugee and immigrant communities, I’ve tried to demonstrate how important it is for us to engage with the arts. It is particularly vital for everyone to express futures they see themselves in. When you can’t articulate your vision of a better world, it’s difficult to create a better society.”

Thao Worra holds over 20 awards for his writing and community service. He is the first Laotian American to receive a Fellowship in Literature from the United States government’s National Endowment for the Arts. He received the Asian Pacific Leadership Award from the State Council on Asian Pacific Minnesotans for Leadership in the Arts in 2009. He was selected as a Cultural Olympian representing Laos during the 2012 London Summer Olympics. He has been a board member of the Loft Literary Center, one of the United States largest and most comprehensive independent non-profit literary centers.

Thao Worra is also the first Lao American to be a professional member of the Horror Writers Association and is a lifetime member of the H.P. Lovecraft Historical Society.

“As we approach the 40th anniversary of the Science Fiction Poetry Association in 2018, I want to ensure that we create an inclusive space for poets and readers along all points of the speculative literature continuum,” Thao Worra said. “There are many different genres of science fiction and fantasy in prose writing, and I think that becomes even more exciting when you consider the possibilities in speculative poetry and all of its varieties.”

Thao Worra was a founding chair of the National Lao American Writers Summit and has organized numerous literary and cultural exhibitions across the US. He helped to establish the national Lao American Artists Heritage Month, first recognized in Minnesota in 2012. His work has been presented by the Smithsonian as part of their traveling exhibit “I Want the Wide American Earth: An Asian Pacific American Story,” and he has been a reader for the National Endowment for the Arts Fellowships in Literature. Earlier this year he taught a course on writing Asian American science fiction and fantasy in San Francisco with the Kearny Street Workshop.

He will be serving alongside SFPA Vice-President Sandra J. Lindow and SFPA Secretary Shannon Connor Winward. The organization will be appointing an interim treasurer as Thao Worra steps down from his current duties in that position. “My fellow officers bring a wonderful range of experiences with them, and they have a tremendous spirit of selflessness and a wonderful sense of community. I’m looking forward to working with them,” said Thao Worra.

Lindow has published seven books of poetry. She has been nominated 22 times for a Rhysling Award. Since 1987, she has served as West Central vice president of the Wisconsin Fellowship of Poets. In 2015, she was elected vice president of the Science Fiction Poetry Association. For twenty-five years she worked as a reading specialist at the Eau Claire Academy, a treatment center for emotionally disturbed children and adolescents. Throughout her career, she has taught reading, writing and study skills to students from preschool through college graduate. She teaches part-time at the University of Wisconsin–Stout in addition to free-lance writing and editing.

Shannon Connor Winward is an American editor and author of literary and speculative writing. Her work has been published internationally, and her poetry was nominated for a Rhysling award. A semi-finalist in the Writers of the Future Contest, she was also runner-up for an emerging artist fellowship in literature by the Delaware Division of the Arts in 2014 and 2015. Her debut collection, “UNDOING WINTER” (Finishing Line Press), was nominated for a 2015 and 2016 Elgin award for best speculative poetry chapbook by the Science Fiction Poetry Association. She is also a poetry editor for Devilfish Review, and founding editor of the forthcoming Riddled with Arrows Literary Journal.

“The coming years ahead will present some exciting opportunities for our members and readers,” Thao Worra said in an interview. “We are particularly interested in working with our international members to help them build spaces for the continued exploration of speculative literature, diversifying our sense of what is possible. For many of members abroad, speculative poetry is a relatively new literary premise, yet one that can tie easily into many of their present and historical traditions.”

For more information about the Science Fiction Poetry Association, you can visit them online at www.sfpoetry.com as well as on Facebook, where they maintain active discussion groups.