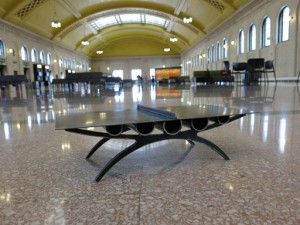 ST. PAUL, Minn. (June 5, 2013) – Union Depot in St. Paul will be at the center of the 2013 Northern Spark all-night arts celebration on June 8, focusing attention on the historic structure’s unique role as a regional transportation center that creates a memorable passenger experience with arts, cultural events and programming.

Union Depot, built in the 1920s, re-opened to the public in December 2012 after a two-year, $243 million restoration. The architectural magnificence of the building and the project’s embracement of the arts were important in attracting Northern Spark festival planners to consider Union Depot as a key site for this year’s event.

“We became very inspired by the beauty and scale of Union Depot, and the idea of artists using all these historic transit spaces for one night,” said Steve Dietz, president and artistic director of Northern Lights.mn, the group that founded and organizes Northern Spark. “This is something that can never be repeated because these spaces will soon be fully utilized and the public will never again have the same access to these areas.”

Northern Spark is the only all-night arts festival in the Midwest—a free, dusk-to-dawn participatory public art event modeled on a nuit blanche, or “white night” festival. This year activities – which include performances, visual arts, projected images, interactive media, and participatory events – will be focused in and around the newly renovated Union Depot. Other key Lowertown sites include the Bedlam Lowertown Theatre, Minnesota Museum of American Art, Black Dog Coffee and Wine Bar and the ever-present Mississippi River. For more information visit NorthernSpark.org.

“We are delighted to welcome Northern Spark to Union Depot,” said Commissioner Jim McDonough, chair of Ramsey County Regional Railroad Authority. “Union Depot celebrates its historic roots as a gathering place by joining with Northern Spark to invite our neighbors and area residents to come and experience this marvelous building and the many artists of our region.”

As part of the federally-funded renovation project, Union Depot, owned by the Ramsey County Regional Railroad Authority, issued $1.25 million in public art grants. The first of 10 public art installations, “Union Table,” an interactive musical pingpong table, will be available in the waiting room of Union Depot just in time for the Northern Spark celebration.

The artist team embraced the concept of Union Depot as the “Living Room of St. Paul” by combining sculpture and community game play. “Union Table” is a sculptural steel, musical, participatory pingpong table that will engage people as a source of entertainment, a tool for creating conversations and an interactive musical instrument for exploration and expression.

Following the festival, the game table will be a permanent fixture of Union Depot’s waiting room, available to those who want to enjoy a quick game over lunch, a spirited tournament amongst friends, or to make a connection with a stranger through the simple act of play. “Union Table” will be just one of many features that will invite visitors to enjoy the public space. The remaining nine public art projects will be installed at Union Depot throughout the summer and into the fall.

Owned by Ramsey County Regional Railroad Authority (RCRRA), Union Depot, originally built in the 1920s, was placed on the National Register of Historic Places in 1974. RCRRA secured federal, state and county funding to finance the $243 million restoration, and major renovation began in 2011 with Mortenson as the design-build contractor with URS Corporation and HGA Architects and Engineers. In 2012, RCRRA hired the international retail and management corporation, Jones Lang LaSalle, to manage the Union Depot and create “The Living Room of St. Paul” experience at the historic landmark. True to its roots, by 2014, Union Depot will offer transportation services via Amtrak, METRO Green Line (Central Corridor light rail), Jefferson Regional Bus Lines, and Metro Transit buses. www.uniondepot.org