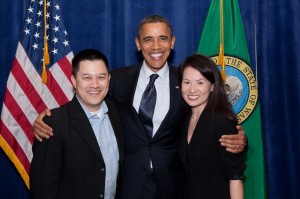 Shen is a Washington state native whose leadership and community advocacy has had a tremendous impact on many economic projects in the Northwest.

“The success of minority-owned businesses is fundamentally essential to our nation’s economic vitality,” said Castillo. “MBDA works diligently in laying the foundation that is giving rise to the fastest growing segment of the business community. I am very confident that Albert will continue to maximize these opportunities and be a great asset to our MBDA team.”

Shen, a second generation Chinese-American, grew up in Pullman, Wash., where his family owned several minority businesses. In 2000, he founded Shen Consulting, where he played an instrumental role in projects such as the Port of Seattle’s Seattle Tacoma International Airport Capital Improvement Program and numerous other capital programs in the greater Seattle area.

“I am honored to accept this appointment as National Deputy Director of the Minority Business Development Agency,” said Shen. “I look forward to elevating the narrative of economic development importance for all minority businesses in this country. The demographics of our economy are changing rapidly and minority businesses must be at the policy table in order to close the wealth gap in the United States and meet the demands of a competitive 21st century international economy.”

As MBDA’s National Deputy Director, Shen will manage the Agency’s day-to-day operations and its national network of 44 business centers.

During FY13, MBDA assisted minority-owned businesses in obtaining more than $4.8 billion in capital and contract awards, which led to the creation and/or retention of 25,704 jobs, the highest performance level in the Agency’s 45-year history.

A second generation Chinese-American, Albert Shen grew up in Pullman, Wash., where his family owned several small businesses. After graduating from the University of Washington with degrees in chemistry and environmental science, he worked in the local environmental consulting industry, including several major Superfund clean-up programs in the NW region.  In 2000, he founded Shen Consulting, where Shen played an instrumental role in projects such as the Seattle Tacoma International Airport Capital Improvement Program and the new EPARK System for the City of Seattle. His business grew from $100K/gross annual revenue to over $1M/gross annual revenue within five years.

Shen lends his expertise to support educational institutions, non-profit community organizations, civic committees, business organizations and political advocacy groups. In 2009, he was appointed by then Governor Christine Gregoire to serve on the Seattle Community College Board of Trustees and as a Commissioner to the Washington State Commission on Asian and Pacific American Affairs (CAPAA) to advise the Governor as the Vice Chair of Economic Development for CAPAA. Recently, he was appointed by Governor Jay Inslee to serve on the Capital Projects Advisory Review Board (CPARB). He is a long-time advocate for the small business community on a variety of economic issues and has hosted numerous roundtables for Asian American small businesses on international economic development. In 2010, he accompanied U.S. Congressman Jim McDermott (D-WA) on an international business and education trade mission to Orissa, India to open doors on higher education exchange and business development opportunities.

The Minority Business Development Agency (www.mbda.gov) is the only Federal agency dedicated to the growth and global competitiveness of U.S. minority-owned businesses. Its programs and services better equip minority-owned firms to create jobs, build scale and capacity, increase revenues and expand regionally, nationally and internationally.

Services are provided through a network of MBDA Business Centers. After 45 years of service, MBDA continues to be a dedicated strategic partner to all U.S. minority-owned businesses, committed to providing programs and services that build size, scale and capacity through access to capital, contracts and markets.