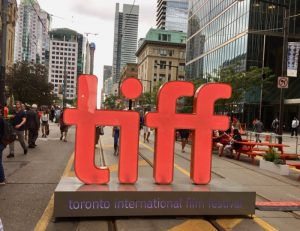 TORONTO (Sept. 7, 2018) — The Toronto International Film Festival (TIFF) kicked off Thursday, Sept, 6 and runs until Sept. 16. This year, there are 342 films representing 83 countries, chosen from 7,926 total submissions from all over the world. 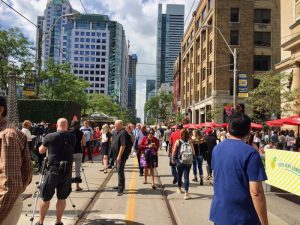 Festival Street in Toronto on Thursday following the start of TIFF. (Photo by Diana Cheng)

But TIFF is not only about films. Its excitement pours out from the theaters onto the streets in downtown Toronto. Several city blocks are closed off to traffic for pedestrians during the opening weekend to charge up the celebratory spirit with free activities, music, exhibits, food trucks and all kinds of promotions and sampling. 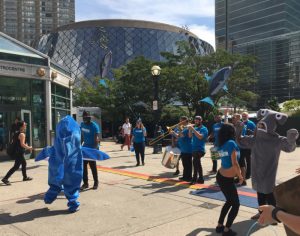 A Thursday promotional event for “Sharkwater,” a film screening at TIFF in Toronto. (Photo by Diana Cheng)

King Street West between Peter Street and University Avenue is renamed Festival Street. That is where headquarter TIFF Bell Lightbox and several major screening venues are located. Here are some of the sights on Festival Street. 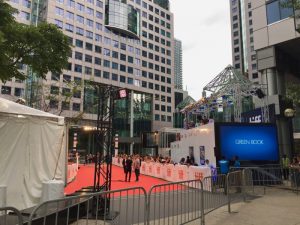 A look outside Roy Thomson Hall on Thursday following the start of TIFF. (Photo by Diana Cheng)

Crowds gather around hotel entrances and screening venues for star gazing. Some arrive as early as 7 a.m. and stand for hours trying to get a glimpse of celebrities. 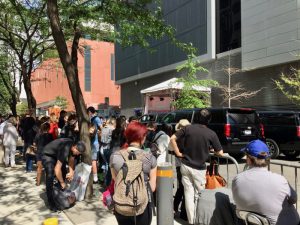 Crowds wait for a view of celebrities in downtown Toronto on Thursday. Many directors and actors are appearing with films at the annual festival. (Photo by Diana Cheng) 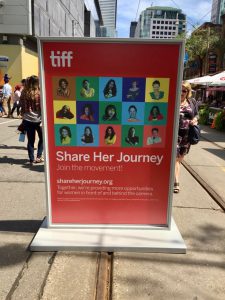 A billboard advertising the “Share Her Journey” opportunities for women in filmmaking movement at TIFF on Thursday in Toronto. (Photo by Diana Cheng)

Ultimately, it’s back to films and film art. From the first man landing on the moon to capturing the plight of migrant children in the Middle East, this year’s TIFF programs connect us all in this global village of ours, during the Festival and beyond.