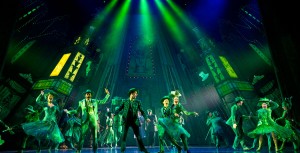 The modern day version blew a life into a story that hooked me from the very beginning. I was instantly transported into a fantastical time of song, beautifully choreographed dance and a story that tugged at my heart.

I was impressed by the championed work required for the prize winning Broadway show to be successful, given its multiple renditions. It’s unimaginable to realize the level of synchronicity that occurs among: cast, crew, musicians, actors/actresses, animals, dancers and performers when all is said and done. The talent unfolded seamlessly and without error. The Wizard of Oz is a show that I could easily see multiple times.

In my interview with Ms. Angela Chan (keyboard player in the orchestra) she suggested that most people who work on Broadway are highly intuitive and relational, which help make productions such big hits. Ms. Chan flew into St. Paul, from Las Vegas to play the keyboard and is overjoyed to be here. My interview with Chan deeply impacted the lens I saw the show through.

While Ms. Chan’s musical talents are endless, as a conductor, composer, keyboard player, pianist and writer (to name a few).  Her first statement about, The Wizard of Oz production was, “The people on this tour are all friends, wonderful professionals to work with and the stage crew is amazing!” Chan underscored, “No one has any idea of how hard the stage and lighting crew works, on/off stage to make this show what it is!”

I felt incredibly fortunate to meet and talk with Angela. Ms. Chan told the story of her musical journey and attributed much of her success to her parent’s encouragement and support. Chan’s love of being a musician was both interesting and exciting to hear about.

I loved that she communicated how important her music is to her and that every show is a new opportunity to create a better show. She stated, “Being a musician is hard work but a lot of fun. We get to touch people’s lives through beautiful music, so I want to perform well each so the audience has a great time.” Smiling ear to ear throughout the interview, she gave credit to everyone and communicated a deep sense of gratitude about being able to perform on Broadway.

In an effort to not retell the story that most people seem to familiar with, I will say that, The Wizard of Oz production had an array of surprising technology and lighting, unquestionable talent and music that lifted me up and transported me to another time and place. I was completely captivated by the dance choreography, powerfully colorful costumes, visionary performances and mind-blowing creativity! I believe that anyone who sees this will forget about the below zero temperatures because the performance genuinely warms your heart.

Recently, I saw young performer on television, along with my great-nephew Jacob (7 years old). Mesmerized by the talent of the singer, Jacob stated, “Kimmy, it’s like magic!” I felt the same about the production of, The Wizard of Oz. From orchestra pit to stage crew, lighting to production, performers to special effects- The Wizard of Oz production currently playing at St. Paul’s Ordway Theater was “Magic!”