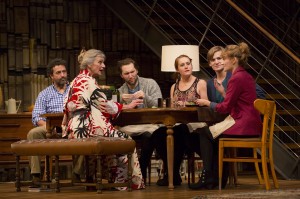 The cast of the Guthrie Theater’s production of Tribes, by Nina Raine. Directed by Wendy C. Goldberg, set design by Alexander Dodge, costume design by Anne Kennedy and lighting design by Josh Epstein. October 5 – November 10, 2013 on the McGuire Proscenium Stage at the Guthrie Theater, Minneapolis. Photo by T. Charles Erickson.

MINNEAPOLIS — The backdrop of the play, Tribes was filled with thousands of books, a large oval dining table and a basic family room couch. It looked stereotypical of some suburban homes I’ve seen.

The stage appeared a reader’s paradise and an academic’s idea of a dream. Tribes, at the Guthrie Theater in Minneapolis told a story about a family who perceived themselves as highly gifted and intellectual writers. Yet, into their adult lives, they all struggled with issues around self-esteem and loneliness, relying unilaterally on the approval of others as their drug of choice.

Mom (Beth, played by Sally Wingert) and Dad (Christopher, played by Stephen Schnetzer) had two adult sons. The deaf son (Billy, played by John McGinty) and the hearing son (Daniel, played by Hugh Kennedy) had an interesting relationship. There was an obvious overlay of feelings that Daniel should have had a better life versus Billy who was born deaf.

The theme of the dialogues between both adult brothers remind me that no matter what age we are, most people continue to yearn for family approval. All family members struggled with feeling insecure. Each character felt isolated in their pain and perceived that the other had a much more satisfying life.

The daughter, Ruth, played by Anna Reichert, also struggled to find a niche she could call her own. Feeling inferior to both Daniel and Billy, anxiety surrounding her ability to sing ran high. Within the closed context of Ruth’s immediate family, she plummeted into shame. Ruth insatiably sought the approval of her parents, Billy and Daniel, which never unfolded.

Christopher, Ruth (played by Anna Reichert) and Daniel were self-professed and highly skilled writers. Each one bragged about the next piece of writing and overstated predictions of current success. Although their presentations to each other seemed anchored in confidence, they appeared intensely isolated as well. Lost in their self-depreciating thoughts, it seemed as though none of the characters had healthy egos, but presented as though they were worthy.

Billy, born deaf and raised in a hearing family seemed most in tact. He appeared calm and upbeat initially. But, after he discovered there was a deaf world outside of his family, he felt extremely resentful towards that he wasn’t apart of them. He felt deep loss when he realized that the deaf people he met had created an intimate community. Billy believed his life would have been more substantive if his parents would have told him that deaf communities existed.

Billy eventually formed a relationship with Beth (played by Sally Wingert) who eagerly worked to create a special place within the world of the deaf community, as well as the hearing world. The relationships sparked a special place in Billy and Billy’s family. Everyone was touched in a unique way by Beth. Beth was going deaf, was proficient at sign language and taught Billy to sign.

Intense, quirky and every day family dynamics revealed that most families are trying to connect, but don’t always know how. Through unique narratives of two people who did not consider themselves as part of the hearing world, the audience got to experience the family through trials, growth spurts and reflective insight. I enjoyed the learning about the many ways family dynamics influence us.

Tribes will run through November 10, 2013 on the McGuire Proscenium Stage at the Guthrie Theater, Minneapolis.