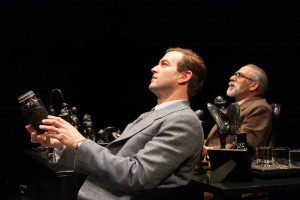 MINNEAPOLIS (Feb. 28, 2014) — Riddled with life’s complex and analytical questions, Freud’s Last Session, directed by Rob Melrose, reminds us that intellect combined with a dash of neuroticism can feel like an emotionally and overburdening life sentence.

Freud’s Last Session opened on February 28, 2014 at The Guthrie Theater in Minneapolis. Robert Dorfman plays a convincingly anxious Freud, in which he communicates Freud’s emotionally troubled times prior to his death. Plagued with oral cancer, Freud’s true to life fears about Hitler’s narcissistic tyranny, life after death and religious beliefs are actively debated with character C. S. Lewis, who is played by Peter Christian Hansen. The two men rigorously dispute religious beliefs about the meaning of life and devout dogma. In attempt to understand atheism, secularism and humanitarianism, the audience was left pondering uncertainties.

While the set features the famous psychoanalytic couch in which no one freely associates, the actors project fears with a manic dialogue about absolute religious ideals. Both men are married to righteous beliefs and challenge one another to orate views immersed in both science and sociological conditions of the time. Privileged and plagued with demons from their past, they explore entitlements to life.

I anticipated that the play would reveal more of Freud’s personal life, but instead, it offered the audience an opportunity to critically question his infamous theories that unfold some truths. While some psychologists may view Freud’s ego as magnanimous and self-serving. Freud’s Last Session, reveals a vulnerable Freud, who like most of humanity, struggles with loving relationships, emotional suffering, physical pain and coming to terms with the meaning of this human experience, we sometimes refer to as a mortal life.