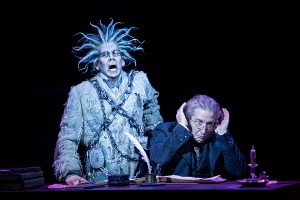 MINNEAPOLIS (Nov 18, 2015) — The Guthrie Theater is presenting its 41st production of “The Christmas Carol”, directed by Joe Chvala,who is also choreographer, actor and producer.

Chvala was asked by Joe Dowling (life time recipient of the Ivey Award in 2015) to direct the 2015 production of the nostalgic Christmas Carol at Minneapolis’s Guthrie Theater. He examined the play through multiple lenses and engaged in a complex multigenerational process of preserving the historical values and integrity of the story while weaving in some creative changes, growing the story with additional perspectives.

Chvala’s abilities to draw on the mature and incredible talent of the cast seamlessly unfolded on stage. Joe Chvala is also the creator of “The Flying Foot Forum” (1991) and was the choreographer for “My Fair Lady.” He has grown quite adept at weaving developed ideas into original work. Adding experiences of expressive imagery and dance choreography, he accepts personal responsibility for making changes that complement a story that is already highly respected. He made the show imaginative while preserving the traditional culture and credibility of the story.

Having attended a Christmas Carol for the third time. I looked to an enthused audience member for a fresh and astute perspective of the show. Ms. Linda Kennedy from Roseville states, “I have seen a Christmas Carol many times over the years, whether live performances at the Guthrie, televised movies from various decades, or amusing adaptations told from an animated point of view (e.g., Mickey Mouse, Mr. Magoo, Sesame Street).” Kennedy adds, “Nevertheless, this year’s production of a Christmas Carol . . . brought forward some new focus points that delighted the audience.”

“In my view,” Kennedy states, “despite wintery gloom, youthful freshness highlighted the stage with a greater focus on children. These young artists acted, danced, sang and illuminated the stage with talent. . . . Another refreshing tweak to this tried and true play was a greater emphasis on female characters.”

Characters Bumble and Bunty who were originally played by men were creatively and delightfully played by talented women. Isabell Monk O’Connor and Suzanne Warmanen exuded warmth and humor which reminded me of the compassion that comes to light during the holidays. Merriweather, played by actress Angela Timberman, and Mrs. Fezziwig, played by Suzanne Warmanen, were scene-stealers in their hilarious renditions of each character. This scene always deletes my worries and replaces them with an upbeat spirit.

All of the characters, whether featured or supporting, were outstanding in their abilities to entertain and amuse. Working with wires, dazzling special effects, and trap doors can’t be easy! I found myself marveling at the abilities and outstanding skills of cast members young and old who seamlessly entered and exited the stage gracefully amidst all the lifts and drops!

The expertise and authority of Chvala, coupled with audience enthusiasm, makes A Christmas Carol a must-see this winter. Shows run from Nov. 11 to Dec. 31, 2015. It’s a great celebratory of theater community merging with widespread talents.